Phuket has some excellent, world-class, theme parks and shows. You must see at least a few when you’re next on the island. They’ll certainly keep the kids entertained – even the Simon Cabaret is ‘family friendly’ whilst being occasionally on the ‘raunchy’ side. They all peer into Thai culture with narrative or performance.

None of these shows are particularly cheap but they all provide excellent value for money and have discounts for kids and staggered pricing, depending on the components of your visit you include. Links to each of the websites in the headings.

The original and the only show of its type currently open in Phuket. The promise of a cabaret show featuring the “prettiest women in south east Asia”. But, hey, it’s Thailand and you’re in for a surprise!

The show isn’t the best cabaret in the world, but it is VERY Thai and entertaining. Poor lip-synching to songs from around the world and many of the male dance partners just filling in stage space are endearing parts of the show. But you will walk away thoroughly entertained despite its theatrical shortcomings. There’s usually something for people from just about any nationality.

And, let’s face it, you’re here to see the ladies!

The show has been running for 31 years and didn’t even miss a show after the 2004 tsunami, although it was closed for 2 years during the Covid pandemic. But they didn’t waste the downtime and gave the 600-seat theatre a full makeover.

You’ll find Simon Cabaret about 800 metres after the turn off towards Karon, northwards out of Patong. Tickets are available just about anywhere around Patong or from your hotel concierge. They’ll even come and pick you up before the show, and after the show you’ll get the chance to meet the performers but a tip is usually required if you want to take a photograph.

There used to be two other big ‘lady boy’ shows running on the island – Simon Star in Phuket Town and Aphrodite at Samkong intersection. They currently remain closed (as of December 2022). 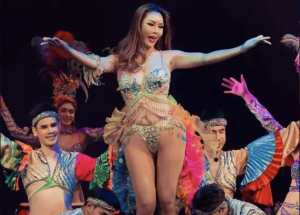 Thai culture 1.01, all in 4 – 5 hours. It’s a theme park, enormous international buffet (if you pay the extra) and a theatre show that truly defies description. When you arrive at the theme park you can wander around different zones and take your time experiencing traditional Thai villages, May Thai, elephant parades and traditional arts and crafts.

Then it’s time for the international buffet, if it’s included in your ticket price. Bring your appetite along to this gastronomic assault; Food from everywhere in the world and one of the largest buffets available in Thailand.

The actual theatre show is highly impressive, a visual feast, although bewildering as there doesn’t appear to be any beginning, middle or end. Broadly, the show covers different époques in Thai history with narratives set in different parts of the country. But, beyond that, just sit back and relax as one of the most spectacular shows you will ever see unfolds in front of you. There’s hundreds of performers, waterfalls, devils, parading elephants, goats, chickens and flying angels.

Like most of these other shows, tickets are available all over the island, or online, and they have a pick up and return service from most parts of the island.

Located on the Bypass Road, about 2 kilometres north of the Samkong intersection.

One of the original grand shows and experiences in Phuket, open since 1998. A bit like Siam Niramit, it’s a theme park, buffet and theatre show, but has quite different themes and, perhaps, aimed at a slightly younger audience.

The theme park, when you arrive, has souvenirs, animal displays, plenty of Instagram opportunities and mock-historical Thai temples to explore. The buffet boasts the “largest dining room” in south east Asia. It’s a huge international buffet and the quality of the food is excellent.

The theatre show has elements of Thai history, mime, grand magic and a cast of hundreds, involving humans, elephants and tigers. Like the Siam Niramit show, it’s a bit hard to follow but it’s still hugely entertaining and you’ll walk out in awe of the stagecraft and sheer spectacle.

Located in Kamala, next to the new Carnival Magic show. 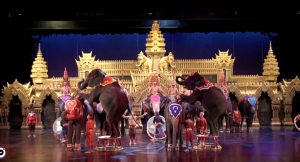 Not so much of a show as an enormous water theme park with elements of scheduled entertainment thrown in. You can just float around Coral World at your won pace near the entrance, or go on some of the wilder rides – some not for the faint-hearted. You can also float around the Great Andaman Bay where a wave machine makes you feel you’re at one of Phuket’s great beaches, complete with man-made beach.

There is a huge water slide in the Naa Jungle and a water ‘roller coaster’ in the Emerald Forest.

Take you bathing outfit and be prepared to get wet.

Andamanda is situated about 800 metres towards Patong from the Samkong intersection. 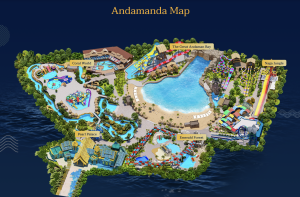 Fresh, quirky and just open. Featuring millions of lights, innovative computerised displays and eye-popping parades. It describes itself as the ultimate lighting entertainment venue on the island. No doubt about that and we’d hate to be paying the power bill!

The new theme park covers 100 rai and is next door to the hugely successful Phuket Fantasea. You’re in for a spectacular and colourful light show, combined with Thai art, cultural heritage and architecture, inspired by the annual festivals, fairs and markets. It is unlike anything you’ve ever seen before and will certainly be a hit with the kids.

There is a lot to keep your visual senses busy and you will never be bored here. Give yourself a few hours and make sure you’re there for the nighttime light shows and parades. 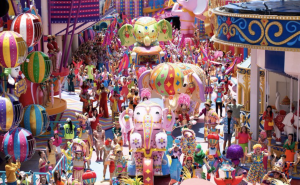