Phuket is a famous tropical island destination with more than 30 amazing beaches, beautiful view points and vibrant entertainment areas (not just Bangla Road), which provide memorable experiences for travellers from all over the world.

There’s also a unique cuisine scene and some excellent southern tastes you need to check out. Especially seafood of course and some very spicy version of Thai favourites. Here are some of the most popular dishes sought after by tourists… 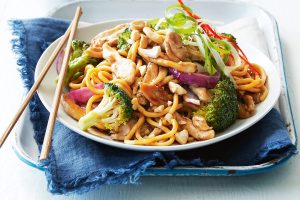 The dish consists of thick golden noodles, shrimp, pork, squid, eggs, and bean sprouts and kale. A simple but delicious dish, full of rich, salty flavours. When eating Mee Hokkien Hoodle you can add some chilli and lemon to taste.

It can be eaten as a lunch or dinner. 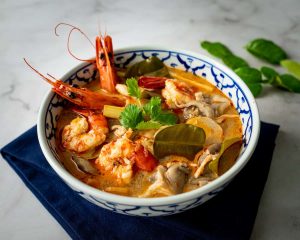 Tom Yum Goong has been considered a symbol of Thai cuisine for decades. This dish has the sour flavour of lemon along with spicy chili, sometimes very spicy. The combination of lemongrass and coconut makes it one of the signature meals in Phuket. Tom Yum Goong prepared from seafood is the most popular. It is called Tom Yum Talay.

There is also Tom Yum cooked from chicken and pork ribs. However, you should consider carefully before eating Tom Yum Goong if you cannot eat hot, spicy foods. 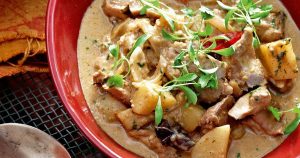 Do not forget to try a Massaman Curry. This food originated from Malaysia and then made its way over the borders into Thailand in the 17th century. Cooks don’t use curry leaves in cooking a Massaman Curry, which makes it different from other kinds of curry. And usually a lot less spicy.

Instead, spices and herbs such as lemongrass, galangal are mixed with sour tamarind to create a gooey base that can be used for both vegetarian and savoury dishes. The meat used is usually chicken but can be prepared with beef, pork and lamb as well. Coconut milk is liberally used. Usually, he paler colour means the less flavoursome or spicy. A Massaman Curry is most often served with rice but other times may be served with a roti-style bread. 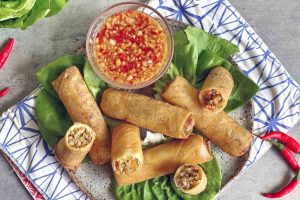 Por Pia is a local version of spring rolls from other Asian countries. It’s made by wrapping some ingredients such as meat, vegetables, crunchy pastry, prawns and rice noodles, then fried with oil to make a crispy and tasty Phuket-spring roll. The special sauce of this dish is made by a local recipe. The combination of Por Pia and sauce attracts a lot of tourists when coming to Phuket and is much sought after around places like Phuket Town. 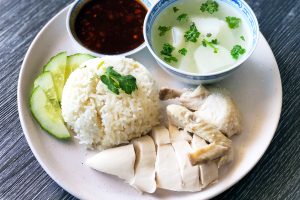 Khao Man Gai is also known as chicken rice, which is one of the most favourite foods of both domestic and foreign tourists when coming to Phuket.

Chicken is boiled until tender, then use the water which is used in boiling chicken to cook the rice. This cooking way helps the rice absorb all the nutrients in chicken. Khao Man Gai is served with chicken stock and spicy-sweet sauce. You can also add spices to taste.

Whilst Singapore is famous for its chicken rice, Phuketians like to argue that the local dish is the regional star.