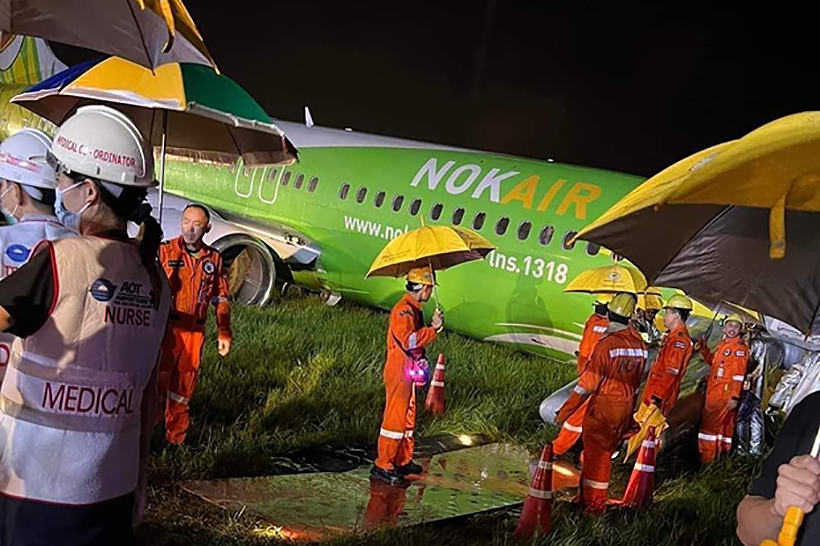 Landing in heavy rain on a runway, at night, is always going to test the skills and nerve of a passenger jet pilot. He will have to make split-second decisions about when to apply the brakes, and by how much, whether to use the reverse thrust of the engines, and be aware of the ever-changing, capricious weather around him or her. All of that is amplified in northern Thailand during the monsoon with torrential rain bursts frequently coming out of nowhere.

Before even getting the wheels down on the runway, the pilot and co-pilot will have to decide if they should continue with the landing, or hit full thrust and do a “go around” and attempt another landing.

For the cabin crew behind the cockpit, they have been trained to evacuate the cabin of a 737 passenger jet in 90 seconds. They will wait for instructions from the captain of the plane. In the meantime, in an emergency, their main role is to be on standby and ensure the readiness of the cabin to evacuate if it is safe to do so.

This entire process seems to have gone into slow motion, to the tune of some 60 minutes, in the case of a Nok Air Boeing 737 landing at Chiang Rai on Saturday night where passengers had to wait up to an hour to evacuate the aircraft.

The flight out of Bangkok’s Don Mueang had 164 passengers. An hour later they were landing in what has been described as heavy rain.

The plane skidded off the runway, the landing gear collapsed and the Nok Air 737 ended up, nose down, in the grass verge. Once the plane came to a stop the pilot, for reasons so far unbeknowns to the rest of us, decided to keep the passengers inside the stranded aircraft for up to an hour.

Once the plane came to rest, the pilot cut the engines, which turned off the air-conditioning and lighting. Although it would have been a bumpy and terrifying few moments for the passengers, they were all safe and sound, albeit in the dark and wondering what the hell was going on.

Some 20 passengers were allowed out of the aircraft, according to some postings from passengers, but it was then decided that passengers, waiting on the runway, could pose a risk to other landing planes (a ridiculous contention given the 737 aircraft, sprawled on the grass verge on the sides of the runway, was still partly blocking any possible landings).

In a statement to the media, Nok Air, one of Thailand’s low cost airways, and currently trading its way out of bankruptcy, included in amongst its reasons for keeping the passengers on board, this sentence…

“There might also have been animals around which could have posed a danger to the passengers.”

Otherwise they claim that the entire procedure, including the delayed evacuation “was in strict compliance with safety procedures”.

Speaking to an airline captain today, Phuket-GO was told that the decision was “unusual” but that there would have been extenuating circumstances that made them keep them on the plane for the hour. He did say all the processes, from the pilot to the airport’s safety crews, appeared to be “overly slow” in response to the situation.

The sole responsibility for the call to evacuate the aircraft comes down to the pilot. At some stage that person will have to front Thailand’s Civil Aviation Authority, the CAAT, and explain the full circumstances. The CAAT Director General Sutthipong Kongpool, rightly, has said the regulator would not comment on the incident “until it heard the captain’s explanations”.

The investigation will also need to look at emergency procedures and the readiness of Chiang Rai’s Mae Fah Luang International Airport. It has now emerged that it took up to an hour for the airport to send buses out to the crash site, despite having clear access to the runway and the stricken plane.

And then it was only two minibuses, not large enough to ferry the 164 passengers back to the terminal. Apparently the airport doesn’t have larger buses available.

Will Nok Air or the CAAT share the full information with us?

A few final comments. None of us were there and we don’t know the full circumstances beyond the information that has been made available to us.

The reputation of the pilot, Nok Air and Thai aviation standards generally, are all at stake here. Luckily these incidents are very few and far between these days, around the world, which makes it so important to have a clear, transparent and full understanding of exactly how the plane ended up, nose down, in the grass with its landing carriages collapsed and 164 frightened passengers sitting and waiting for an hour.

The Chiang Rai Airport will be closed until at least Friday.