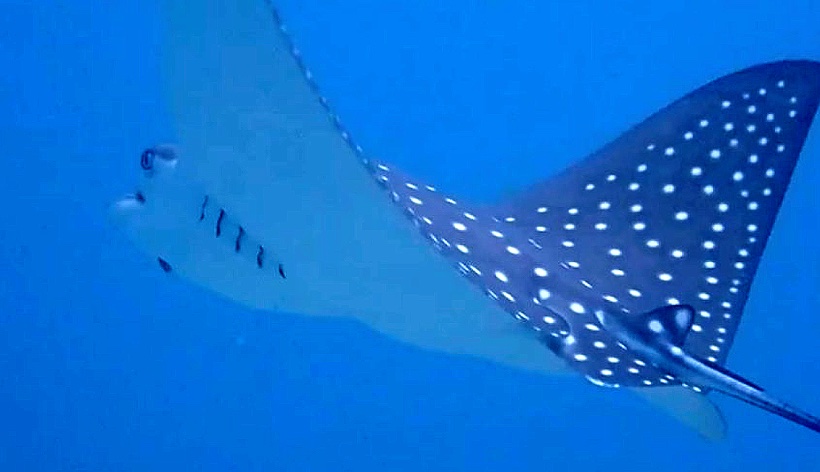 A 50 year old manager of the Island Dover Shop, Jirasak Puthawan, has shared a video and photo of a rare spotted stingray that he found while diving in front of the Viking Cave, on Koh Phi Phi Leh in Krabi (on the other side of the island from Maya Bay).

The video went viral among groups of divers and sea animal lovers on social media. The photo shows a rare sting ray that was bigger than 2.5 metres wide and the length from head to tail around 3 metres. It was swimming in deep water in the area near the popular cave. 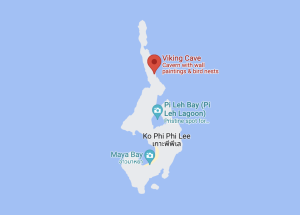 The spotted eagle sting ray is part of the Myliobatidae family and is a large-size sting ray that is rare to find and had disappeared from the waters surrounding Koh Phi Phi.

The spotted eagle ray is a cartilaginous fish of the eagle ray family, Myliobatidae. As traditionally recognised, it is found globally in tropical regions, including the Atlantic, Pacific and Indian Oceans – Wikipedia

Jirasak said that he found the sting ray yesterday morning while he was taking some travellers to dive in front of the Viking Cave and he is “very glad to had seen the creature”. He said it is as rare as finding a whale shark in the area. 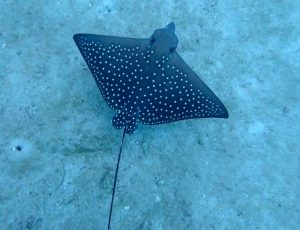 If you would like to organise a trip from Phuket to Koh Phi Phi Leh or any of the islands off Phuket, click HERE.