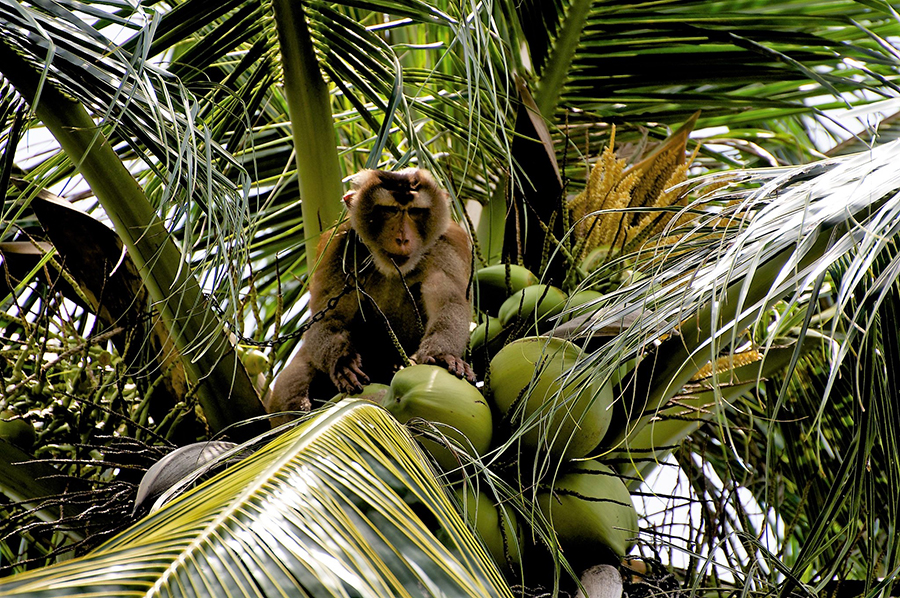 The Department of Agriculture plans to introduce a coconut harvesting tool in response to widespread concerns over the industry’s use of monkeys doing the job of picking the coconuts. The move follows a campaign run by PETA (People for the Ethical Treatment of Animals) Asia, which slammed Thailand for its treatment of the monkeys allegedly forced to pick coconuts in places like Koh Samui.

Jason Baker, senior vice president at PETA Asia, has welcomed the development, expressing hope that the introduction of a new harvesting tool could put an end to monkeys being used.

“PETA is hopeful that the machine developed by the Department of Agriculture will lead to the retirement of the monkeys. They are captured, chained, and forced to pick coconuts in Thailand’s coconut industry.”

Baker goes on to say that other countries, such as Sri Lanka and India, have already taken it upon themselves to use similar equipment, without any pressure from PETA.

“Workers in India and Sri Lanka have been using similar contraptions to climb tall coconut trees even before PETA started our campaign, but anything that the Thai government and the coconut industry can do to replace monkeys is a welcome step in the right direction.”

PETA Asia says unless Thailand does more to protect its monkeys, the allegations of animal cruelty could have a negative impact on the country’s coconut industry.

“Suffering monkeys remain an inherent part of Thailand’s coconut industry, and a lot more work needs to be done if the country doesn’t want to see its coconuts shunned in favour of animal-friendly alternatives, as happened with Indonesian palm oil.”

PETA Asia’s campaign against Thailand’s use of monkeys for coconut harvesting kicked off around 2 years ago, with the release of a damning report into the practice.

It’s understood the Department of Agriculture now has 3 factories working on manufacturing a coconut harvesting device to replace the use of monkeys.