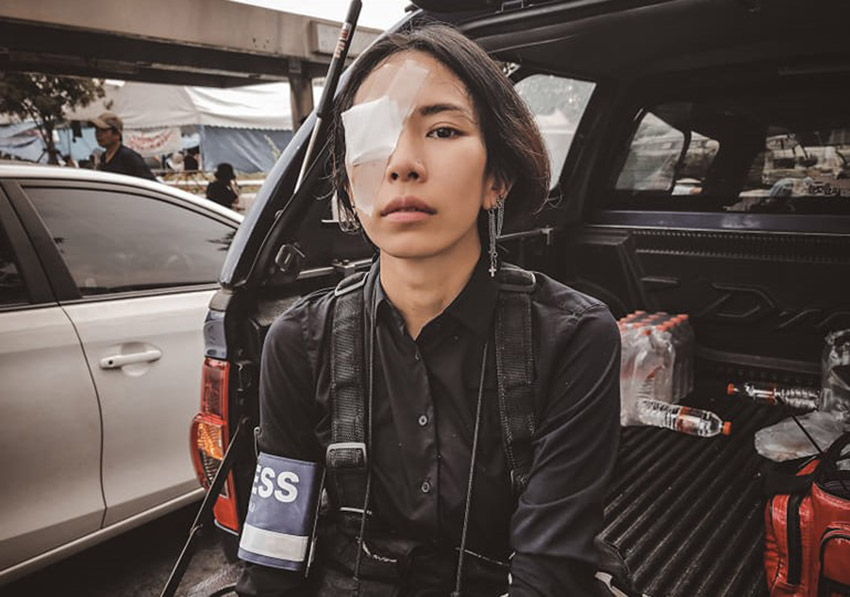 A senior editor from Thai news outlet The Matter has asked a House Committee to investigate alleged police brutality against reporters during last week’s APEC Summit in Bangkok. The confrontations happened in an area that was 9 kilometres walk away from the summit location, the Queen Sirikit Convention Centre.

Pongpiphat Banchanont submitted the request to Natcha Boonyachai-insawad from the Move Forward Party, who is also chair of the House standing committee on political developments, media, and public inclusion.

According to a Nation Thailand report, the letter calls for an investigation into police crowd-control procedures near the Queen Sirikit National Convention Centre on November 18. The centre was the venue for the APEC Summit, attended by leaders from around the world and security around the centre and in nearby areas was tight.

On November 18, anti-government protesters, determined to make their opposition to PM Prayut Chan-o-cha known to world leaders, gathered near the centre. Clashes with police soon broke out and riot police allegedly shot rubber bullets into the crowd. Many videos indicating the conduct of both sides made their way to social media and providing lawyers with plenty of evidence of the clashes.

Video clips of police attacking a journalist and a monk being shoved against a wall have gone viral on The Matter website. Nation Thailand reports that the journalist was attacked despite shouting out that he was a reporter and displaying his press armband.

Upon receipt of the letter, Natcha issued a statement to say police violence against reporters was inappropriate. He says according to information he has received, 4 journalists in total were injured in the fracas – a Reuters photographer, a journalist from The Matter, a photographer from Top News, and a journalist from Prachathai.

Natcha says a House panel will meet to discuss the issue as soon as possible, with plans to gather further evidence and summon officials to testify.

Meanwhile, Pongpiphat says that the Thai Journalists Association had met with the Metropolitan Police Bureau to discuss how field reporters work. He says journalists sent to cover an event are carrying out their professional duty, just like police officers.

He added that the Civil Court had determined that police must take journalists’ safety into account when using dispersal tactics against protesters.

“The operation on November 18 harmed several reporters. This prompted us to wonder whether police obeyed the order of the Civil Court or not. Our police could do better than this. We would like to see police work with standards and responsibly.”