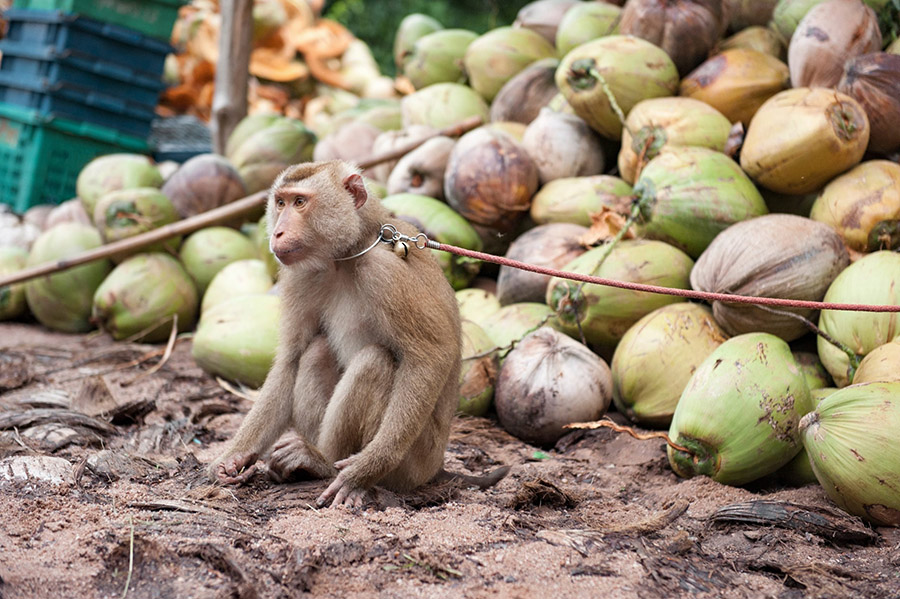 Activists from the organisation People for the Ethical Treatment of Animals will protest outside the Theppadungporn Coconut Company’s headquarters in Bangkok today. According to a TTR Weekly report, the activists will be dressed in prison suits, to highlight the abuse of captive monkeys forced to work in Thailand’s coconut trade.

The protest by PETA follows their third investigation into the use of monkeys in the coconut industry in Thailand. Thai officials have previously insisted monkeys are no longer being used to harvest coconuts. However, the PETA investigation claims to show otherwise.

The organisation says its investigation looked at practices across 9 provinces, including top coconut-producing areas. According to Jason Baker, PETA senior vice president, investigators discovered that monkeys are in fact still being used, including by brands that claim to be “monkey-free”.

“Condemned to a hard and bleak life picking coconuts around the clock, these sensitive monkeys never once get to spend time with family or experience joy. PETA calls on everyone to avoid buying coconut milk and cream manufactured in Thailand until the industry agrees to break these chains.”

According to PETA, monkeys used in the coconut milk industry are captured and removed from their natural habitats as babies, with some even having their teeth removed if they try to defend themselves. If not used in the coconut industry, they are forced to perform in circuls-type shows for tourists.

The report goes on to claim that when not working, monkeys are kept chained up, often in flooded land or patches of dirt, strewn with rubbish.