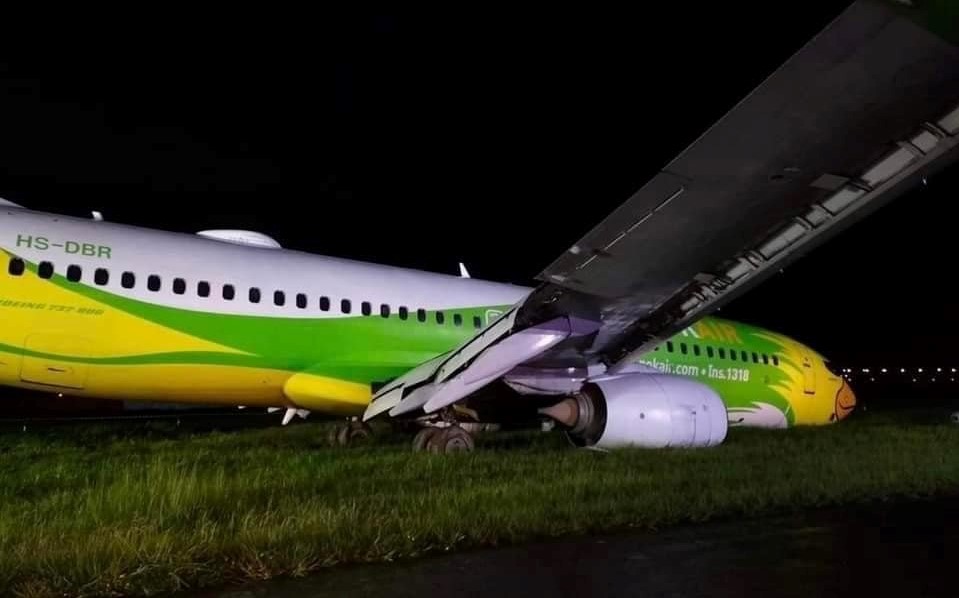 Airport officials at Chiang Rai’s Mae Fah Luang Airport have confirmed the facility will remain closed until at least 10.00pm on Friday. The airport was forced to close after a Nok Air flight from Bangkok skidded off the runway on Saturday night. Attempts to move the stranded Boeing 737-800 aircraft are ongoing, having proved unsuccessful yesterday.

According to a Nation Thailand report, while workers were attempting to tow the plane yesterday, the left landing gear collapsed as a result of the ground sinking under torrential rainfall. Airport authorities then decided to extend the closure of the airport, which was due to end today. As a result, more flights to and from the airport have had to be cancelled or diverted.

Read our editorial about this incident HERE.

The flight cancellations and diversions are having a negative impact on Chiang Rai tourism, which was only just picking up after a 2-year pandemic-induced slumber.  The President of the Tourism Council of Chiang Rai, Promporn Jindawong Nateharn, told the Bangkok Post that most tourists with trips planned for this week have cancelled or postponed.

“We saw an impact on tourism as the incident happened during the busy 4-day-long holiday period. Passengers had to catch new flights from Chiang Mai, while new visitors decided to wait and see as air travel is the most convenient transport and the airport is the key gateway to this mountain province.”

Meanwhile, Nok Air has come in for some heavy criticism over how long it took to evacuate passengers after flight DD108 from Bangkok’s Don Mueang Airport skidded off the runway while landing in heavy rain. The flight had 164 passengers on board, along with 6 crew. It’s understood the Civil Aviation Authority of Thailand plans to interview the captain as part of a wider investigation into the accident.