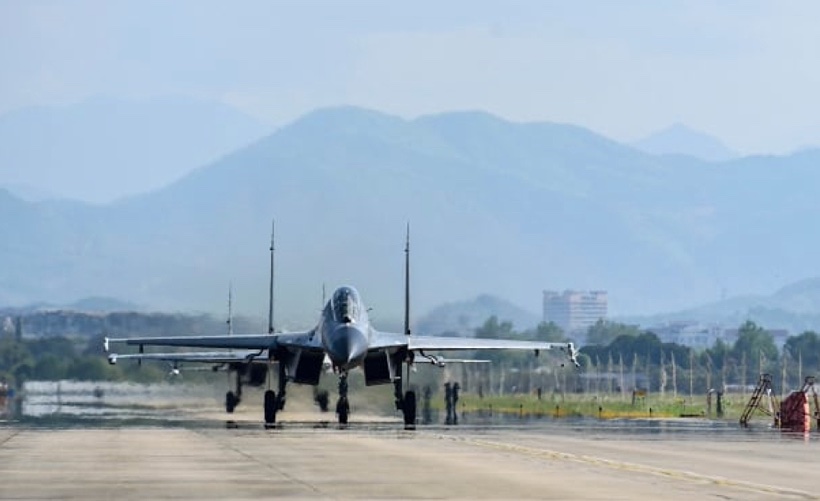 China is conducting 10 days of joint air military exercises with the Thai Air Force in northeastern Thailand from today (Sunday).

The Falcon Strike exercise is being held at the Udorn Royal Thai Air Force Base in northeast Thailand, near the city of Udon Thani, and close to the Laso border. Thai fighter jets and airborne early warning aircraft from both countries will also take part.

The Chinese air force is sending fighter jets and bombers to Thailand.

The training is said to include “air support, strikes on ground targets and small- and large-scale troop deployment”, according to the Chinese Defense Ministry.

The joint military exercises coincides with the US conducting “combat drills” in Indonesia bringing together soldiers from Indonesia, Australia, Japan and Singapore. It’s the largest Super Garuda Shield exercises hosted in the region since 2009.

The regional ‘sabre rattling’ by the two super powers follows a number of tense weeks in the skies over Taiwan when China has responded to a visit of US Speaker of the House, Nancy Pelosi to Taiwan.

China sent warships, missiles and aircraft into the waters and air around Taiwan in a threatening response to a visit by the high-level US politician to the self-ruled island, which China claims as its territory.

China’s expanding military activities in the Asia-Pacific have alarmed the US and its allies with both sides ramping up their strategic and economic allegiances in the region.

The US Defense Secretary Lloyd Austin visited Thailand in June as part of an effort to strengthen what he described as America’s “unparalleled network of alliances and partnerships in the region”.

A senior advisor to US President Joe Biden on the Indo-Pacific has specifically re-iterated the US resolve to maintain a military presence in the region.

“The U.S. would take resolute steps to support Taiwan, including sending warships and aircraft through the 160 kilometre-wide waterway that separates Taiwan and China.”

“We’ll continue to fly, sail and operate where international law allows, consistent with our longstanding commitment to freedom of navigation. That includes conducting standard air and maritime transits through the Taiwan Strait in the next few weeks.”