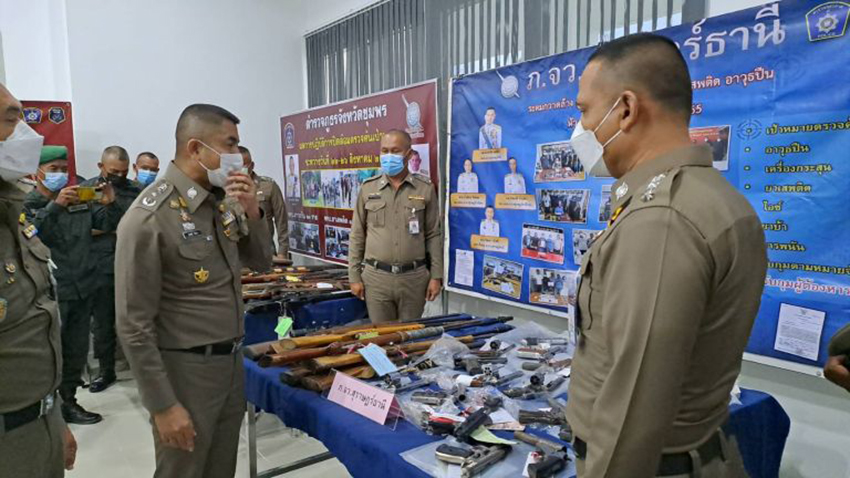 A major police crackdown in the upper southern provinces of the country, including Phuket, has netted over 69,000 methamphetamine pills, over a kilogram of crystal methamphetamine, 85 guns and 859 bullets. According to a Phuket Express report, the busts were carried out across 7 provinces, over 4 days, with officers confiscating the weapons and ammunition, along with 69,182 meth pills (commonly known as “yaba”) and 1,083 grams of crystal meth, aka “ice”.

Police Lieutenant-General, Surachate Hakparn says the authorities targeted over 500 suspects across the 7 provinces. 49 of those were in Phuket. Most weapons were seized in Surat Thani, followed by Krabi, and Phang Nga, according to Surachate.

“The crackdown was aimed to ensure safety. More than 500 targets in 7 provinces in the upper southern area which are Krabi, Chumphon, Nakhon Si Thammarat, Phang Nga, Phuket, Ranong, and Surat Thani were raided in which 49 of them are in Phuket.”

Earlier this week, police in Phuket arrested a 32 year old man on drugs charges, seizing 1.29 kilograms of crystal meth and over 2,000 methamphetamine pills in the process. The man faces charges of illegal possession of Category 1 drugs with intent to sell.