A spokesman for the Royal Thai Navy says 1 sailor has been rescued and 23 are still missing following the sinking of a Navy warship. 6 bodies have now been recovered, according to Admiral Pokkrong Monthatpalin.

HMS Sukhothai sank off the coast of Prachuap Khiri Khan, in the Gulf of Thailand, during stormy weather on Sunday. At the time, there were 106 sailors and marines on board and 31 were reported missing in the immediate aftermath of the sinking.

A sailor was later rescued off Prachuap Khiri Khan by HMS Kraburi on Monday, according to a Bangkok Post report. A further 7 were rescued yesterday, with only one of them still alive.

Admiral Choengchai Chomchoengpaet has expressed his condolences to the family of the dead sailors. He says a full probe into the accident will be launched, including investigating allegations there were not enough lifejackets available.

“I’d like to express my deepest condolences to all the families of the deceased among the crew of HTMS Sukhothai.” 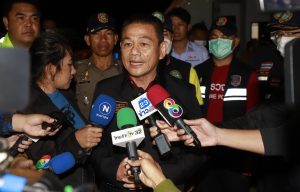 According to the Bangkok Post, an unnamed source claims the surviving sailor, believed to be a ship inspector, reported that the ship had tried to anchor off a beach but was unable to do so, and instead tried to return to Sattahip, in the eastern province of Chon Buri.

At that stage, a number of additional marines decided to join the ship, meaning an increase in crew numbers and only 70 lifejackets onboard, according to the source.

Choengchai has expressed his hope that more survivors may yet be found, as he thanked other countries for offering to send their navy personnel to assist in the search.