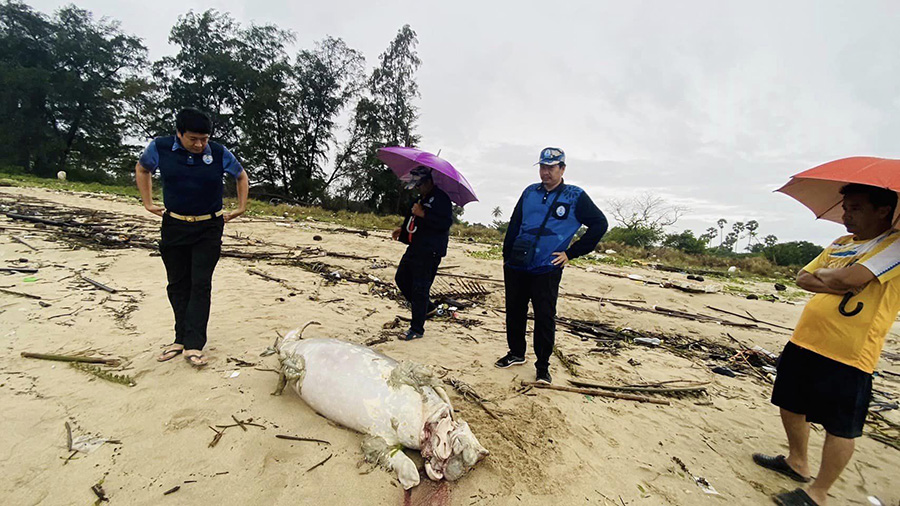 Facebook/Department of Marine and Coastal Resources

Officials in the southern province of Surat Thani say it’s likely a dead dugong found on a beach in the district of Chaiya was hunted for its fangs. According to a Phuket Express report, Sanae Rattanasamnieang from the Chaiya Fisheries Office says the dugong was dead around 4 days before being found.

“The dead dugong is about 15 to 20 years old. It is about 2 metres long and weighs about 200 kilograms. It is believed that the dugong died at least 4 days before it was found.”

Sanae visited Naai Amphoe Beach in the sub-district of Takrob where the dugong was found. He says the creature’s mouth had been tied with rope and what looks like knife wounds were found on its body.

“Its fangs were cut off. Some people believe that its fangs are holy and use them to make an amulet. An autopsy is being conducted to find its exact cause of death.”

Sanae was accompanied by Surat Thani Governor Witchawut Jintoe, who said the dugong is the second one to be found dead in the province in the space of 2 months.

“It is a big loss for nature and the environment as the dugong is a reserved wild animal at risk of extinction. If this dead dugong is proven as being hunted by humans, those people will face legal action.”