The report from CNN Travel praised the crab omelette for its fluffy texture and crispy edges, as well as the sweet chilli sauce that finishes it off. The Isaan sausage, hugely popular in the north-east of the country, was singled out for its flavour, helped by the ginger, chilli and fresh cabbage that it’s traditionally served with. Meanwhile, the northern curried noodles dish, Khao Soi, was praised for its creamy, chilli-laced coconut soup, served on egg noodles with either chicken or beef. 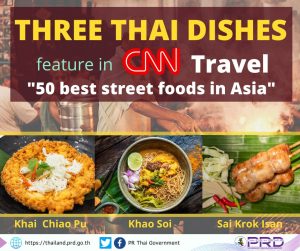 The government has welcomed the inclusion of Thai dishes on the CNN Travel list, with spokesman Anucha Buraphachaisri saying Thai cuisine is proving popular worldwide due to its variety of tastes and textures.

He went on to say that the government is working with various agencies to promote the country’s “soft powers”, such as its cuisine, on the international stage, with the ultimate aim of generating revenue for the country and boosting the economy.