Thai Cave Rescue is the latest movie, documentary or series to make its way onto a screen near you about the famous rescue of the 13 soccer players from the Mu Pa (Wild Boar) soccer team in northern Thailand from the Tham Luang caves back in 2018.

But this time the focus is well and truly on the 12 young men and their coach and how they get through their ordeal, stuck inside the caves for up to 18 days (the actual rescue was over a period of 3 days). In fact the entire first episode is about the young team, their lives and their relationships.

Rather than focussing on just the milestones and mechanics of the international rescue mission, this time Thai Cave Rescue goes deeper on the difficult decisions, and emotions of the main players and their families, following the highs and lows of the ordeal. Some of the filming was conducted in the real homes of the members of the Mu Pa team as well as in the Tham Luang cave itself.

The series beautifully showcases the geography of the region and there’s been no expense spared on the production values brought to the screen. We see a lot more of the actual Tham Luang Caves and the surrounding areas. Rain, and monsoonal consequences, feature often and much of the shots outside the cave give us an idea of the persistent and torrential rain.

We also get a much deeper appreciation of the cultural nuances that affected the decision-making processes and the unsettled lives of some of the team, without citizenship or families in some cases. There is also focus on the back story of Saman Kunan, the 37 year old former Royal Thai Navy SEAL who died during the set up for the rescue while returning to a staging base in the cave after delivering diving cylinders.

Whilst there were some notable actors involved, all the youngsters were newbies selected from teenagers living in northern Thailand. They had a crash course in acting and, in places, their lack of experience shows. But they warm up to the task as the series goes and there are certainly some tear-jerking moments. 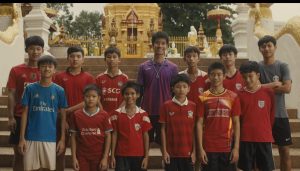 One of the main actors, Papangkorn “Beam” Lerkchaleampote, who played the key role of Coach Eak, actually died after the filming of the series, on March 22 this year. Ironically he had been playing football earlier on the day and died in his sleep, apparently as a result of heart failure. His portrayal is the heart and soul of the series as we share the full weight of his responsibilities inside the cave.

The six episodes give the production time to grow and cover a lot of ground and characters who played key roles in the rescue, and some new peripheral stories that hadn’t found attention in earlier documentaries or films on the subject.

There’s also a wonderful sequence at the very end of the final program which will bring it all home – a story about real people.

We recommend you watch the series in its original Thai language although there are long passages in English as well. But the English translation track is a bit ham-fisted in places and you’ll have a better experience, overall, watching the show with its original soundtrack. Each episode is around 1 hour long, some longer some shorter. We bet you’ll binge watch the whole series.

Filming started in August last year and is now available on Netflix. 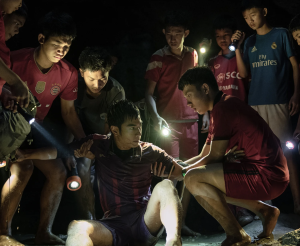