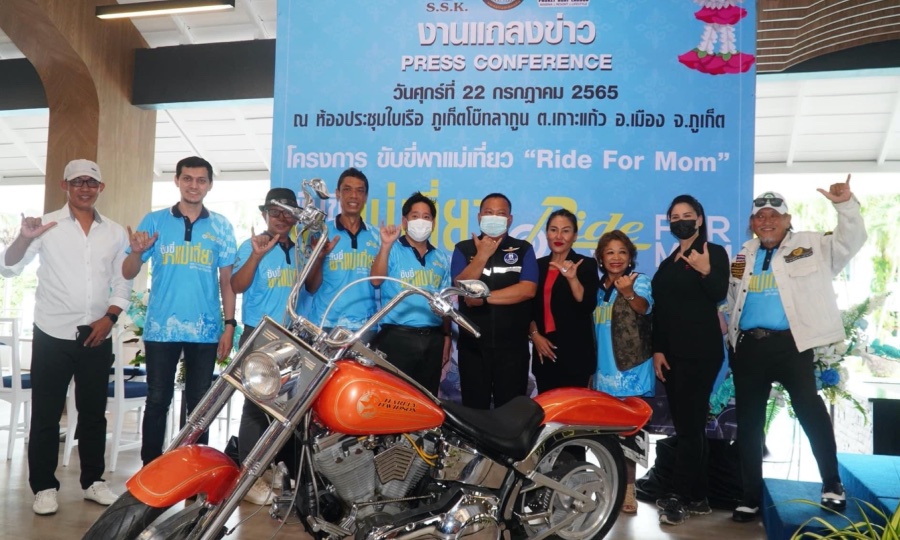 Ride for Mom in Phuket

The event was arranged to honour HM Queen Sirikit, the Queen Mother, on the occasion of her 90th birthday. The first Ride for Mom was organised by the then Crown Prince, Maha Vajiralongkorn, for 2015. Thailand’s King is an avid cyclist. Some 300,000 people joined the inaugural event around Bangkok.

The PPAO president took the opportunity to make a speech to honour the Queen during the event. Rewat said that the Phuket Bike Week Association arranged ‘Ride for Mom’ to show the importance of Thai Mother’s Day and to create an activity for people who love riding motorcycles to bring their mother to ride and travel together.

He explained that the route started from Sarasin Bridge, at th northern tip of the island, heading to Boat Lagoon in Koh Kaew, a distance of around 30 kilometres, from 2 – 4pm. Once they arrived there was a fashion show featuring Thai fabrics, a Thai fabric exhibitions to promote the art of Thai fabric to both Thai people and foreigners, and Carabao 40th Anniversary Concert raising donations to purchase medical equipment for hospitals in Phuket.

There was also an auction of three special items at the event to raise additional money for local public hospitals.

Around the country there was a variety of celebrations for the Queen Mother’s 90th birthday.

The BTS in Bangkok had free rides, as long as you brought your mum. At first Bangkokians and visitors thought it was a prank. But the BTS confirmed that it was for real –  the free rides were for those who took their mother along.

Also in Phuket there were candle lighting ceremonies and a mass shrimp release.