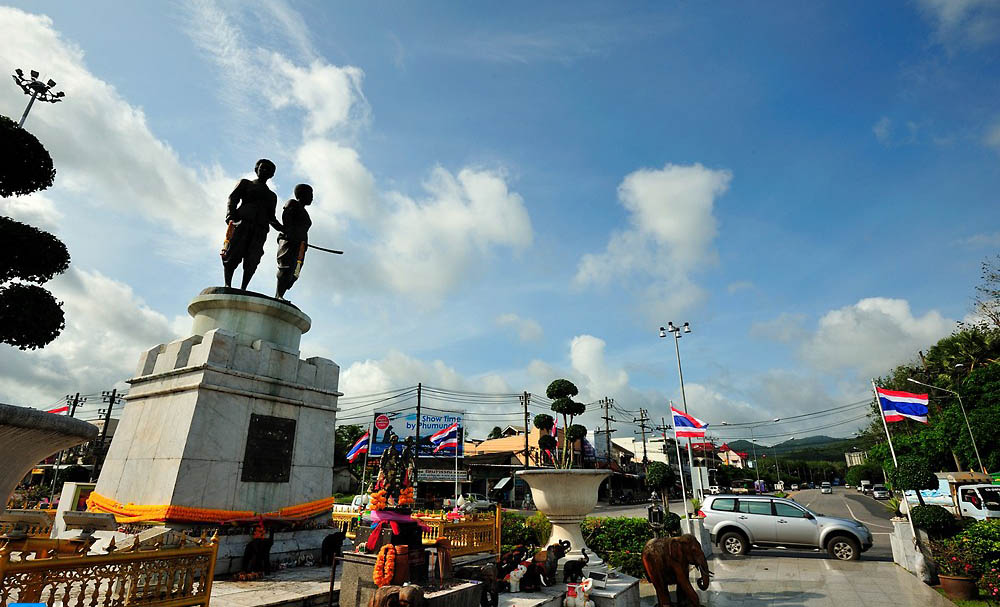 The Heroines Monument is one of the best known landmarks on the island of Phuket. Thousands of people drive past it everyday at the traffic roundabout on Thalang’s Thepkasattri Road, right in the middle of the island. And any visitor coming to Phuket southern half of the island will have to drive past it.

There it is, a roundabout adorned with Thai flags and offerings to the two brave ladies depicted on the statue.

The two ladies commemorated and celebrated weren’t even Thai, they were Burmese sisters.

Lady Chan and Lady Mook led the local Phuketians of the time, mostly other women, to fight against Burmese intruders.

The battle they led and won 2 centuries ago still lives large in the psyche of locals. Of famous female war heroes Chan and Mook are right up there with Jon of Arc, Sybil Ludington, Florence Nightingale and Queen Boudica.

Chan and Mook were born into the  Baan Kien Village family in Thalang, central Phuket. Chan married and was a widow twice. Her second marriage, when she was around 45 – 50 years old, was to the governor of Thalang Town who eventually died from a long illness. 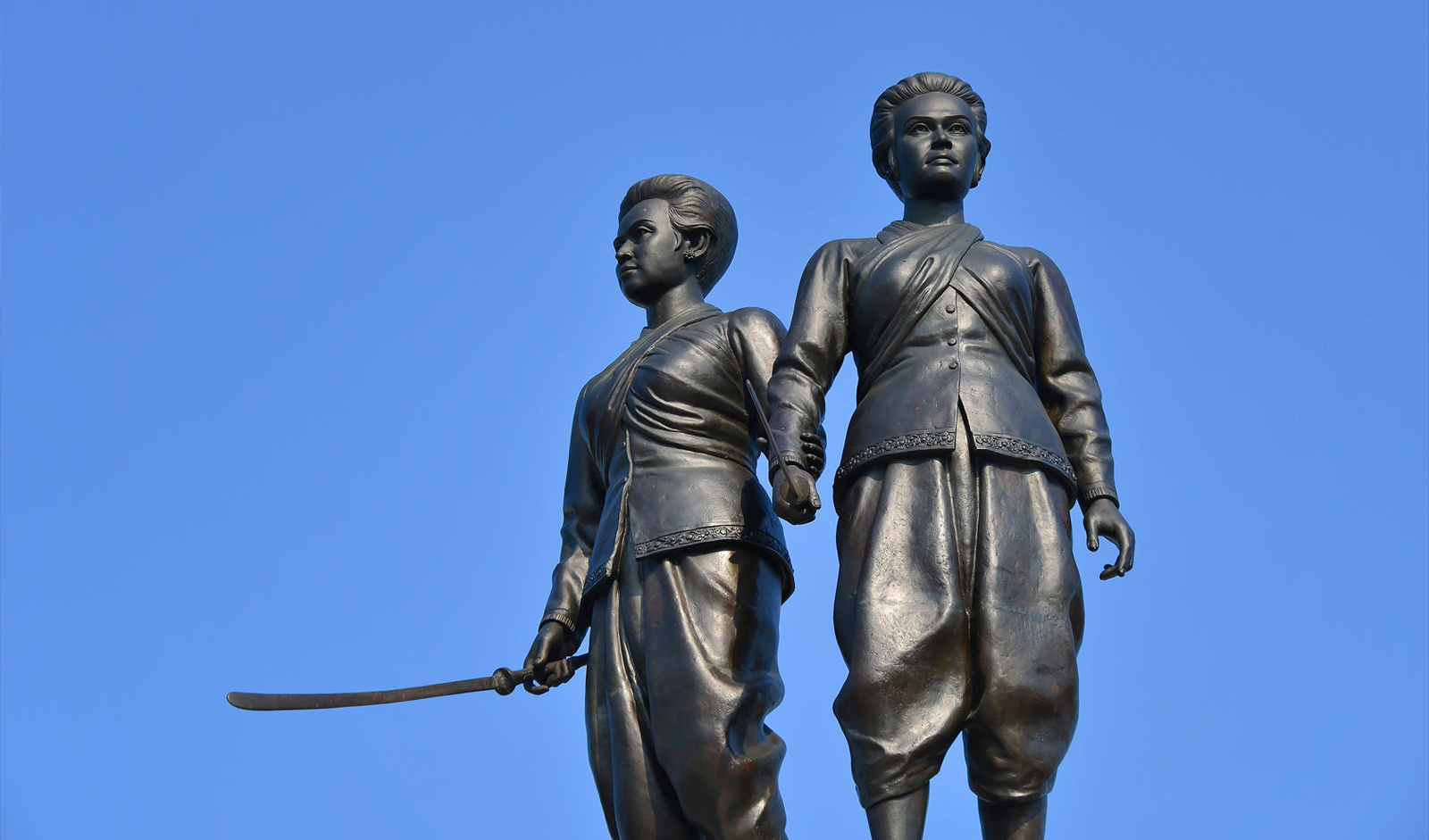 The occurred at the same time the Burmese were preparing to invade the island. But Chan and Mook rallied the available resources to defend Phuket. As many of the island’s men were already flighting the Burmese on the mainland, the two plucky women dressed many of the other woman to embellish the depleted forces that could repel the Burmese.

The Burmese soldiers, looking across the 300 metre-wide channel separating Phuket and the mainland could only see thousands of troops facing off and ready for action. They didn’t realise that most of them were the wives and daughters of the island’s men.

Both Lady Chan and Lady Mook lived full and active lives after the Burmese battles. They became involved in the tin trading that would eventually take over the life on the island and become an industry that made profound changes to Phuket. The vast majority of little lakes and waterways around Phuket are the result of the tin mining and have filled up with water in the centuries after and become landmarks and features.

There is a small shrine at the base of the main monument in the middle of the roundabout that intersects Thepkasatri and Srisoontorn Roads (the two women’s surnames), where people pay their respects to the ladies. 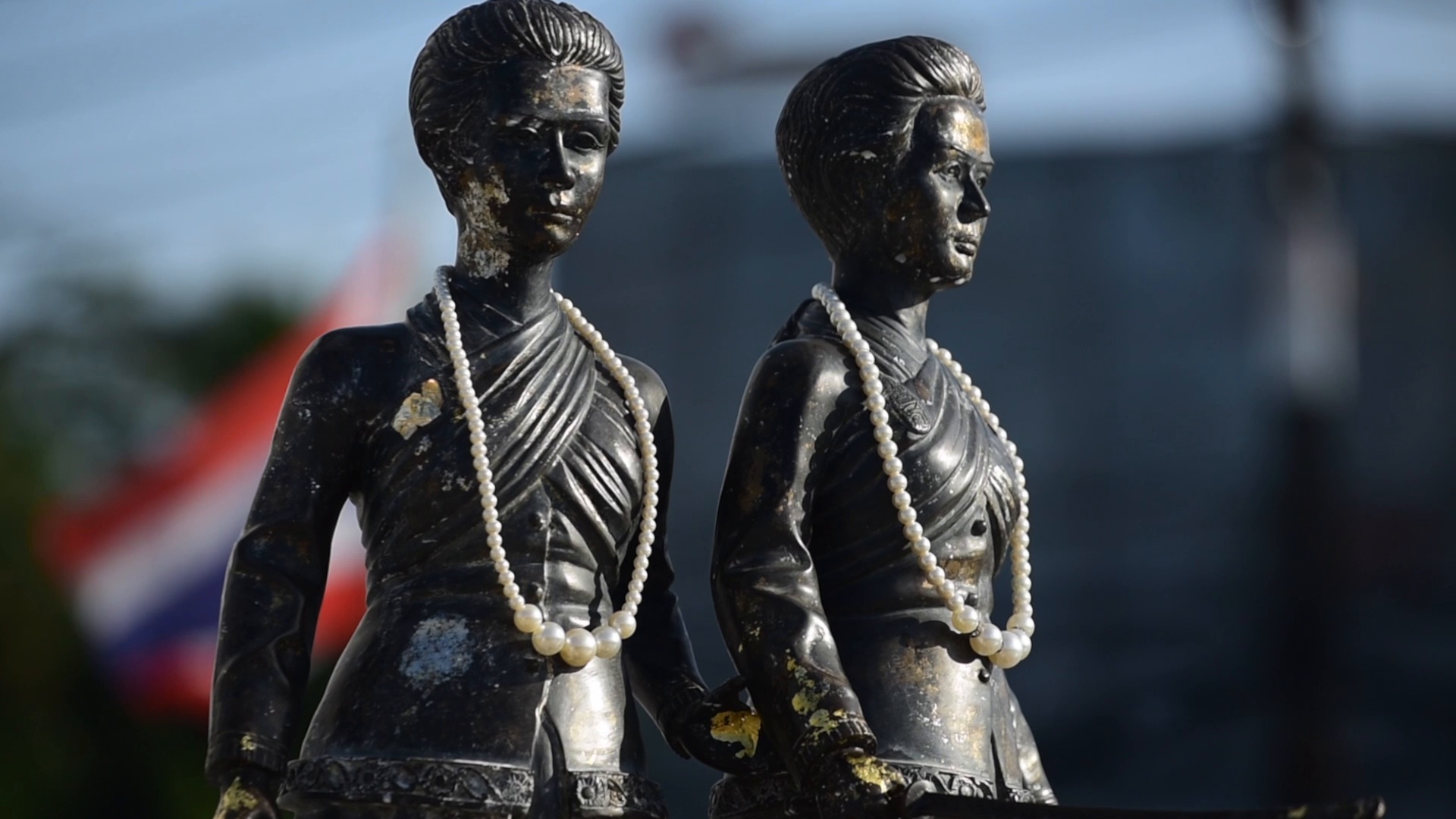 Many Thais visit the monument to pay tribute and their respects to the amazing women. The first stop, always well publicised, is the arrival of a new Governor (every two years or so) who are whisked from the Airport to the Heroine’s Monument to public acknowledge the spirits of Chan and Mook.

For the locals about to leave Phuket, the heroines are believed to protect them from misfortune before leaving the island. It’s often visited by students who are going away to pursue higher education in Bangkok or overseas.

In all cases, getting to the monument is a modern 21st century battle! Situated as the centrepiece of a busy roundabout, there is simply no break in the traffic, coming from all directions. So the plucky locals and visitors that wish to visit the actual monument are as brave as the island’s earlier ancestors who stood tall against the Burmese invaders.