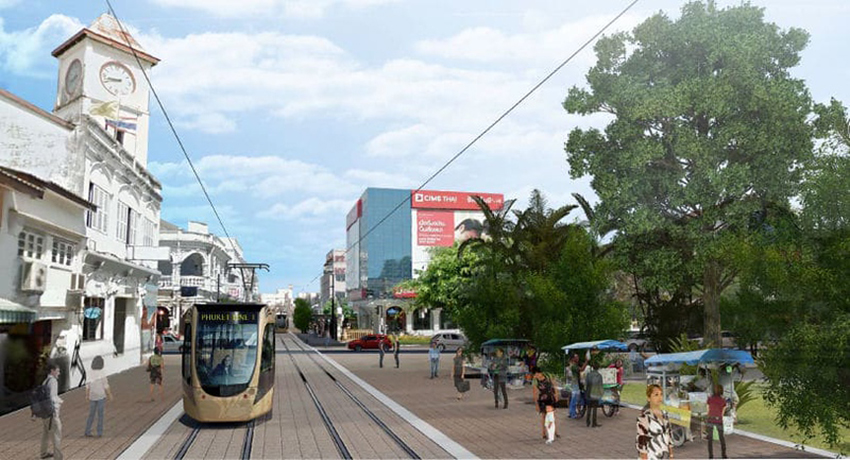 The saga of the long-running debate over a light rail public transport system in Phuket has reached its latest phase. The project, regarded as a white elephant project by many before it even starts, has been a topic of discussion for over a decade.

The route of the tram/automatic bus/light rail will approximately follow the main north-south road down the middle of the island – Thepkassatri Road. The route hardly goes near any tourist locations, a point of major debate with tourism stakeholders on the island.

Today, the Transport Ministry says a public hearing will decide whether Phuket will choose automated rapid transit buses or a tram system as part of an overhaul of the island’s transport infrastructure. According to a Bangkok Post report, the Mass Rapid Transit Authority will hold the hearing between today (June 15) and 21 in order to get feedback from the island’s residents, who will also be given information on the fares associated with both transport systems.

Transport Minister Saksayam Chidchob says officials will consider feedback received from government agencies and the private sector in deciding whether to opt for a tram system or the rubber-wheeled, driverless, ART buses. So far, it seems the ART system is the preferred option, as it takes less time to build and is cheaper to run, meaning fares would also be cheaper. The system would cost around 17 billion baht to build and buses would run on dedicated roads, with safety barriers erected.

In both cases, the island’s busiest road would suffer enormous disruption during the construction process, and in some locations, is barely 4 lanes wide, which would have to lose some lanes as the new transport system will take up space in the middle of the carriageway.

The tram system, or light rail project, would cost approximately 33 billion baht to build and would require overpasses to be built at intersections.

Work is expected to begin on the chosen system once the public hearing has concluded, with the project forming part of Phuket’s bid to host the 2028 World Specialised Expo. The first phase will operate from Phuket Airport to Chatchai pier, through the Chalong Intersection, helping to transport attendees at the expo, if the island is successful in its bid.

The first phase would consist of 21 stations along a 42-kilometre stretch. An extension of 16.5 kilometres is planned for the future, connecting Tha Noon and Muang Mai with 3 stations.

This video was prepared when the system was being first publicised and features the earlier option of a light-rail system.