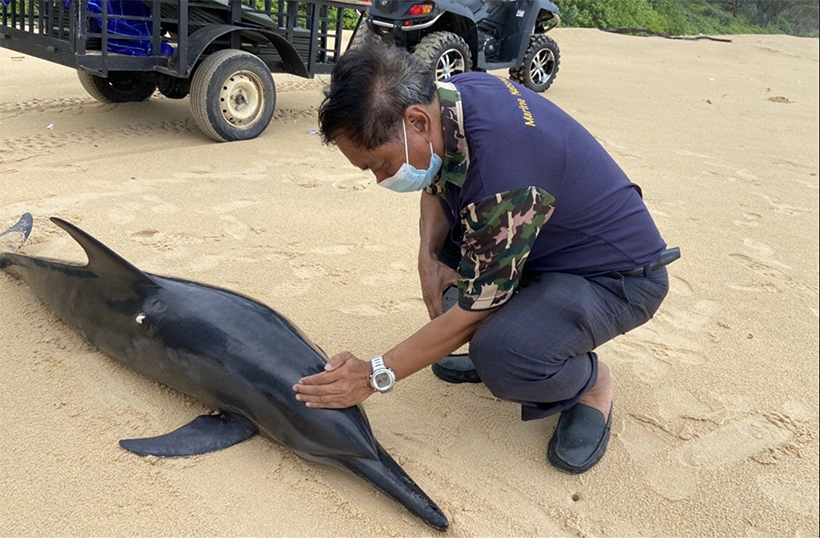 On July 1, the Chief of Khao Lampi–Hat Thai Mueang National Park, Prarop Plaeng-Ngan, received a report from a local fisherman that a spinner dolphin was found washed up along the coastline at Tai Mueang Beach, between Phuket and Khao Lak.

At the beginning, the fisherman reported that the dolphin was still alive and it was found the Tai Mueang, near Na Yak Hill.

The national park chief brought a team to the scene to rescue the dolphin but it was too late. The 1.72 metre dolphin had just died before the team arrived.

After checking, the dolphin had a 3 centimetre long wound and it looked quite old. They decided that the wound was probably the cause of death because of an infection.

The team delivered the dolphin to the local Phuket Marine Biological Centre for an autopsy.

The spinning dolphin is a protected animal according to  Wild Animal Reservation and Protection Act, BE 2535 from 1992. The full-grown spinner dolphin is about 2 – 2.35 metre long. The males are slightly longer than the females. The new-born spinner dolphin is about 75-80 centimetres with a slim body. The mouth is small and narrow and the body colour is dark blue. On the back, there are faded white lines on the side of the body and there are dark separated lines from the eyes all the way to the fins.

The mammal usually has 40-62 small teeth. Females require 10 months of pregnancy and 1-2 years for nursing the new born dolphins. They give birth approximately every 3 years. The name, spinning dolphin comes from their behavior that they like to jump and spin. They usually hunt at night as a pack.

FUN FACT: The collective noun for a group of dolphins is a ‘pod’.