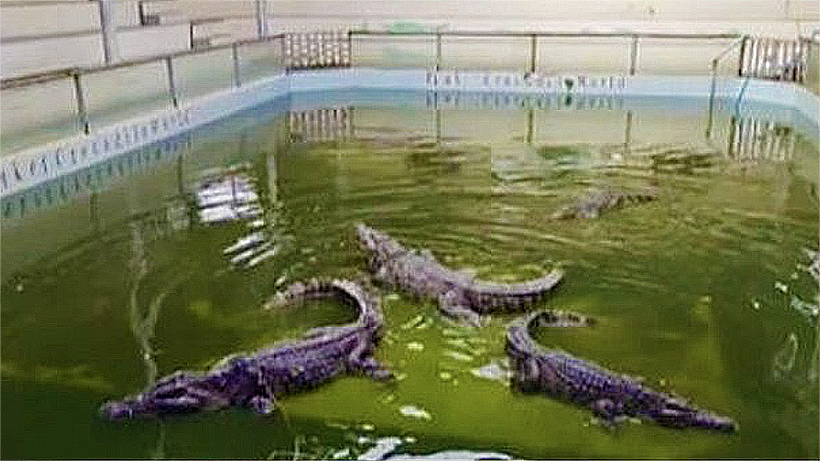 The video clip of an abandoned crocodile farm in Phuket has gone viral in TikTok from the user ‘chefkongpkwizard’, who claims himself as a crocodile and exotic animals farm ‘expert’ who visited the street and showed footage of staving crocodiles.

He grabbed and pulled a big crocodile easily while explaining that the crocodile must be starving and weak. However, he noted that he is a reptile expert with experience so the action “is not something you should try at home”.

The crocodile farm closed after the Covid-19 pandemic situation that affected the local economy severely. It was once filled with paid visitors daily.

The video showed that there was a large crocodile being chained to avoid it from hunting other smaller crocodiles.

The TikTok user asked the local authorities and the farm owner to pay attention to the welfare of the reptiles. He also asked the public to donate food to them in the meantime.

Another Tiktok video, with the name Kookkik, shot a footage when she went to the farm with food.

“I came here today. Next time, I will bring 20 kilograms. Today I only brought about 20 kilograms and it was not enough. I will also bring cat and dog food.”

“Humans are the meanest. They worked for you making you earn millions of Baht when the visitors were coming. Now, the economy goes down, you abandon them. Everyone is welcome to feed them. They are very thin.”

The videos have received more than a million views with several comments.

However, the owner of the farm, Sakul Nganwiwatthaworn, claimed that he never abandoned the crocodiles.

He said that his staff speaks to Phuket Fishery Office once a month and the officials went to inspect the farm quite often. There is a person feeding the crocodiles regularly and when she does not show up, he would buy the food, too. He insisted that the crocodiles are not starving.

He said there are 28 crocodiles in the farm and he will contact the fishery office again. If someone wants to buy the crocodiles; the big one would cost nearly 10,000 baht. The small ones are about 1,000 baht. People are welcome to visit the farm with free entry.