A large earthquake has struck off the coast of Indonesia’s northern Sumatra island early today. The epicentre of the 6.2 magnitude quake was 48 kilometres south-southeast of the Sumatran city of Singkil in the Aceh province. It was located at a depth of 37 kilometres – shallower earthquakes usually cause more damage.

The earthquake hit at 6:30 am local time.

Indonesia’s Meteorology, Climatology and Geophysics Agency measured the quake at 6.2 magnitude and says there was no threat of a tsunami for local low-lying areas. Phuket and the Thai Andaman coastline were not under any threat from this seismic event. 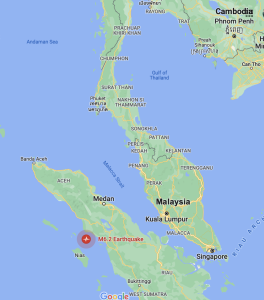 “The earthquake caused people to panic. It was felt between 3-10 seconds in four districts in Aceh and North Sumatra province,” according to Abdul Muhari, a spokesman for the BNPB.

Quakes in this area are not uncommon and came into sharp focus with the underwater earthquake and ensuing tsunami on the morning of December 26, 2004, known as the Indian Ocean tsunami, Boxing Day tsunami or the Asian tsunami. The band of Indonesian islands, stretching north-west into the Indian Ocean, form a section of the Pacific Ocean’s “Ring of Fire”, where global tectonic plates slide up against each, occasionally releasing massive energy in the form of earthquakes.

The earthquake that caused the Indian Ocean tsunami was at 9.2 magnitude.