A 4 kilometre section of the Patong Tunnel project has been approved. The newly approved section of road would link the actual tunnel to the new 30 kilometre-long Mueang Mai (around the Phuket Airport) – Koh Kaew – Kathu tollway, which has already been approved last July.

The new Mueang Mai – Koh Kaew tollway will run approximately parallel with the currently over-worked Thepkasattri Road. The new road will be mostly elevated and has a budget of 13.4 billion baht, including land acquisitions.

The new 4.2 kilometre section that was approved yesterday will navigate some new territory and transfer traffic from the tunnel along the back of Patong Hill, and then past the Loch Palm Golf Course to continue through the middle of the island to pick up the expressway route in the hinterland between Koh Kaew and Kathu.

The new stretch of road will include five interchanges where traffic can join or leave the expressway traffic. Bidding for construction of the new section of road will open the day after Christmas and a tender selected by March next year.

Motorbikes won’t be able to use the new expressways.

The much-discussed Patong-Kathu tunnel, running under Patong Hill, is yet to have its budget approved but it was hoped yesterday that the new roads, all the way from the airport to Patong, including the tunnel, will be ready by 2028.

Meanwhile, the repaired Patong Hill Road, including winder sections of road and removal of some of the tighter curves, is now fully open in both directions for all traffic. 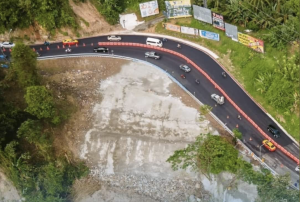 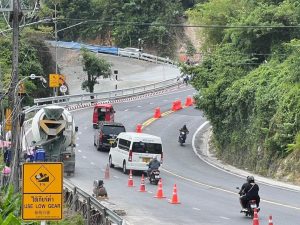