A+ for effort and enthusiasm, C- for final result.

The new alternative road up Patong Hill, via the Go Cart track opposite Tiger Kingdom (not the one next door) is now open. Part of the road up the hill was already constructed for local residents and a few tourism business – an elephant camp and a zipline.

But an additional 2 kilometres of concrete road has been laid around the back of the hill to rejoin the old Patong Hill Road at the top, opposite the Chinese temple.

The actual newly laid road has been done very well, and quickly, but navigates some VERY steep sections. One tuk tuk that was trying out the road at the same time as Phuket-GO was unable to get up one of the hills and had to turn back. 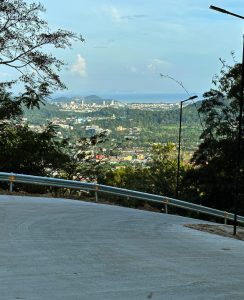 PHOTO: Another view from the ‘alternative road, looking east towards Phuket Town

The biggest problem, unsolved at this time, is the new intersection at the top of the hill when the new alternative links back with the existing Patong Hill Road. There is now a difficult and dangerous right hand turn for the ‘alternative’ road traffic, against traffic coming up the hill out of Patong.

During the time Phuket-GO was inspecting the new route, there was very little traffic using it, even though the old Patong Hill (now open to one lane of traffic in both directions) was packed with tail-back on both sides of the hill.

The new route, however, is an excellent back-up plan for any future problems on the existing Patong Hill Road, which expects to be fully repaired and completely open by Christmas Day.

One reason people will try out the new road is the amazing view across Patong from one of the highest spots along the new route – we’re sure the people behind the road will make a proper viewpoint for people to stop and enjoy. 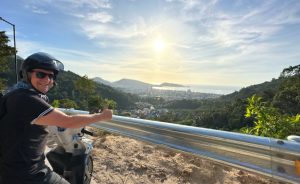 In this article:alternative, Kathu, Patong, Patong Hill, road to Patong, traffic in Phuket