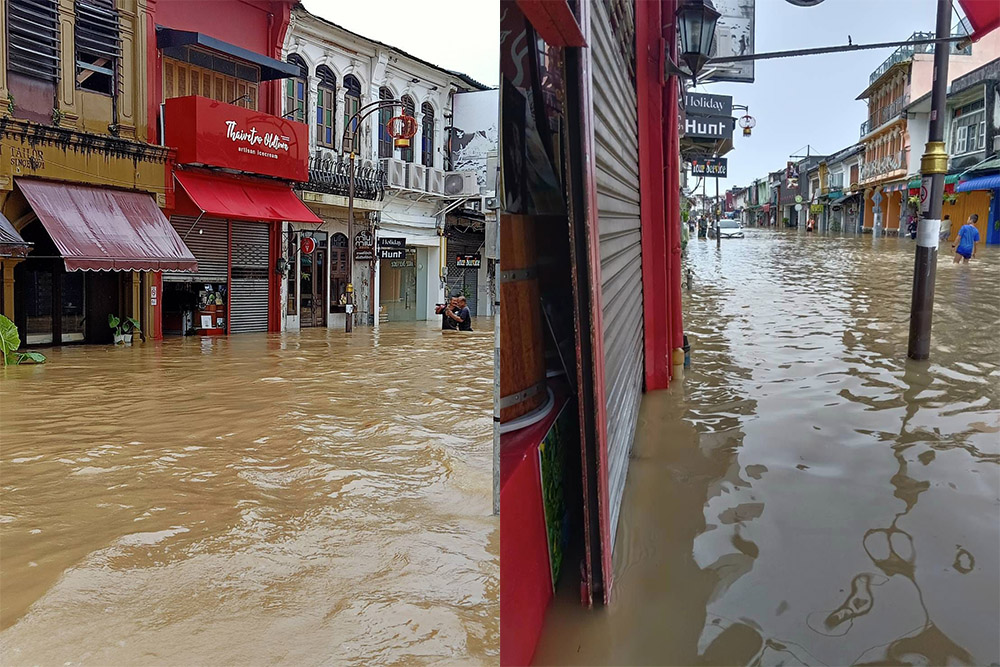 After the mammoth clean up of Saturday night’s heavy rain across the island, particularly the central and northern parts of Phuket, officials are now having to cope with more heavy rains today, and more on the way throughout the week.

More heavy rain is forecast for Phuket, all the way through to Sunday. Rain is expected each day, sometimes heavy, up to at least the weekend, with intense rain bands on the Phuket radar today (below). Top temperatures are expected to reach just 26 and 27 degrees through to the end of the week as the rain keeps temperatures down and humidity up. 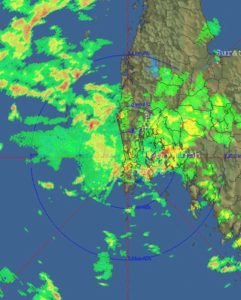 Phuket Radar screenshot at 8.30am this morning

After a record July rainfall in Phuket, October has already surpassed its average rainfall and set to be almost double the average if the heavy rains persist.

Governor Narong Woonciew has been visiting affected residents across the island, starting in the Phuket Old Town area, which has seen the worst flooding in 50 years. Narong also visited flood victims in the sub-district of Rassada (east of Phuket Town), where the water levels are yet to subside. A giant water pump is being used to drain the floodwaters and the governor has instructed local officials to help affected residents.

Yesterday, a major clean-up operation got underway across the entire island. Torrential rain over the weekend has left some areas badly affected, although no casualties or deaths were reported. According to a Bangkok Post report, 5 roads and 3 bridges have been damaged, while landslides have disrupted electricity and water supply in some areas.

In Cherngtalay this morning, in front of Blue Tree (video from Newshawk Phuket).

Many smaller roads on the island are being made impassable as trees keep falling over them and emergency services battling to keep up with the blocked roads and get help to the flooded communities. 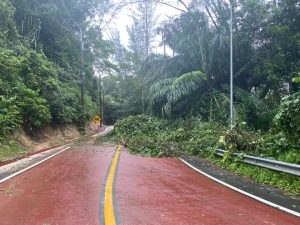 The Phuket Provincial Administration Organisation is supplying equipment for a major clean-up operation, including 3 backhoes, 3 water pumps, a backhoe loader, 4 trucks and 20 workers to clear roads that have been affected by landslides.

Many other areas have been blocked with torrent of mud flowing down from the hills and clogging up residential communities. 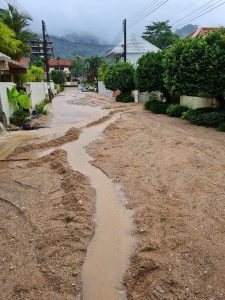 At the Bang Niew dam, in the northern sub-district of Srisoonthon, a total of 6 landslides have been reported, affecting traffic. Workers began clearing the road yesterday but are battling the elements as the rain continues throughout today.

Meanwhile, in the sub-district of Kamala, on the west coast, 9 power poles have been toppled, which caused power blackouts for 6,000 homes. It’s understood power was restored at around 9pm last night and the power poles will be reinstalled within 5 days.

With conditions set to deteriorate over the next few days we would advise against making longer trips across the island unless absolutely necessary at this time.