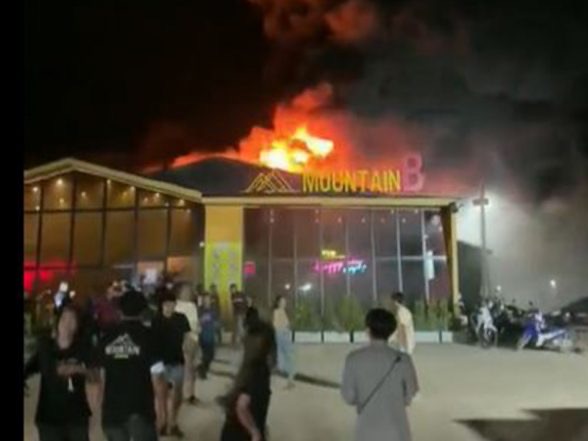 Another horrendous, and preventable, night venue fire in Thailand.  At least 15 dead this time, and many others disfigured for life. In this case it was an all Thai affair and the venue, just another cheaply built, cavernous barn with a pretty entrance put on the front with a colourful neon sign. There are so many of these fire hazards around Thailand and you have probably happily walked into them in the past without even considering that safety inspections may not be as vigorous as where you come from.

This time it was the Mountain B venue in Sattahip, south of Pattaya. 15 people confirmed dead at this stage and up to 38 injured, some seriously burned and still on ventilators.

We are yet to hear the results of the full investigation. But you can guarantee there will be some familiar excuses we’ve heard many times before. Blocked exits, non-compliance with the building codes, use of highly flammable materials and operating outside of required permits.

Of course there has already been the parade of officials being transferred out of the region to a desk job at headquarters… considered a punishment where the strings are cut between their top jobs and the vast amounts of payola that makes their positions so lucrative. 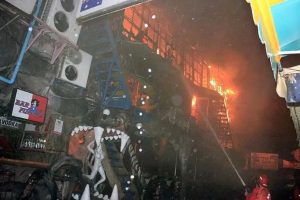 Almost ten years to the day, on August 17, 2012, there was also a fire at the Tiger disco in Bangla Road, Patong, in Phuket. Investigations at the time said the blaze either started from a short circuit or could have been caused by lightning striking a transformer. But in many ways the shortcomings of this venue echo the same problems at Mountain B last Friday. Have Thai authorities learned nothing about fire safety over the past decade?

Four people died in the Tiger Disco fire, all found in the bathrooms at the venue trying to escape the flames, including a French and British tourist, and 2 locals. 11 others were injured.

The fire happened around 4am, long after the official closing time, but the club’s owners say the people inside were just “sheltering from the rain” at the time. A lack of functioning exits was, again, brought up as a key factor to the safe evacuation of the people inside.

No jail time was ever served after several owners were charged following a one month investigation. 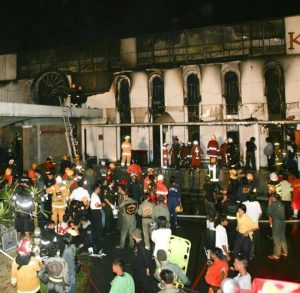 The worst of these nightclub incidents was probably the Santika Club fire which happened during new year celebrations in Ekkamai, an upscale part of Bangkok, in the first hour of 2009. A total of 66 people were killed and another 222 injured when fire swept through that venue. Coincidentally the band playing at the time was called “Burn”and ironically the name of the event was “Santika’s Last Night”. The fire broke out at half past midnight and people from 13 countries were amongst the injured.

Again, waterproofing black tar, styrofoam and acoustic foam were all part of the problem, allowing the fire to spread quickly. And, again, a lack of exits was the main problem. In the case of the Santika Club fire, there was only one main exit available at the time, only one fire extinguisher on the premises and it was only licensed as a ‘food vendor’ so was meant to be closed at midnight anyway.

In November 2015, one of the club owners was jailed for 3 years. Other owners, members of the police force, were never charged over the incident.

These venues pop up from time to time, The Mountain B, apparently open only a couple of months in the Sattahip district south of Pattaya. They are cheap to build, just need a committed social media employee to get them known, and the word of mouth does the rest.

But these places are death traps, nothing more. Many of these large bars and venues are basically decorated barns or warehouse structures with a bespoke piece of enticing entrance nailed on the front with a tempting neon sign.

They are not properly designed buildings and skirt around the few building codes that do exist. None of these venues, including the Mountain Bar, would have past any slightly rigorous inspection. From aerial photos taken, the Mountain B roof also had insulation just draped across the top of the steel roof, with rubber car tyres holding it down. 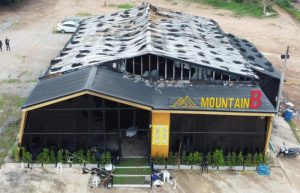 Apart from these3 incidents there has been plenty of others, luckily far less fatal, but none-the-less, just big empty death traps where people are packed in and then the venues operated beyond the permitted operating hours, usually in clear sight of the local police.

It is likely the number of dead from the Mountain B incident will keep rising in coming days as some of the worst burned victims succumb to their injuries. Our heart certainly goes out to the families and friends of the dead and we wish the injured a speedy recovery.