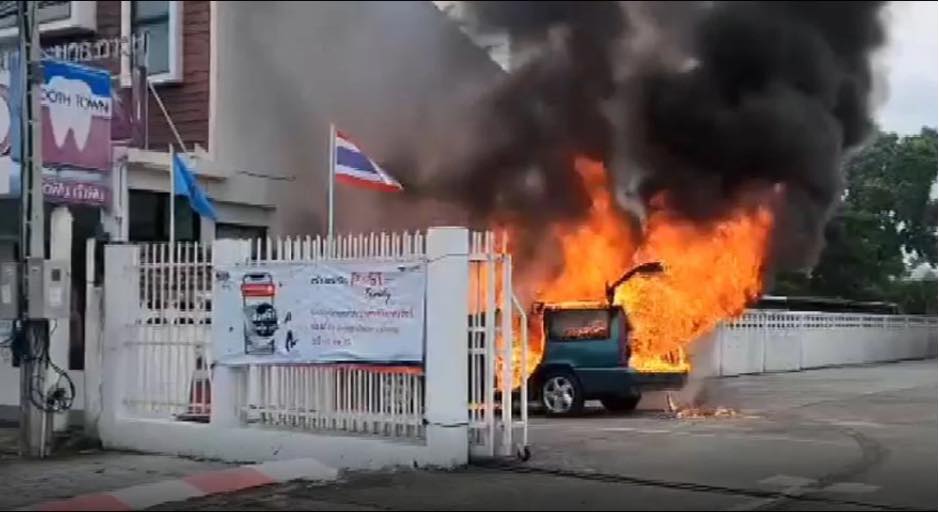 A Swedish man and his daughter have had a lucky escape after their Volvo burst into flames in the sub-district of Rawai. The incident occurred yesterday as the man was driving along Wiset Road. According to a police report, it’s believed petrol was leaking from the vehicle at the time.

Police say the driver drove the car, which was “heavily ablaze”, into a wall by Rawai Post Office. The man and his daughter then managed to escape the burning Volvo, with the daughter being helped out of the car by a Good Samaritan on the scene.

It’s understood post office workers attempted to put out the fire but were unable to do so. Firefighters arrived on the scene and took about 10 minutes to extinguish the blaze, which had caused significant damage to the car.

According to Chalong Police, the driver has been named as 57 year old Hans-Ola Persson from Sweden. Neither he nor his daughter were injured in the incident.

In a related incident, the Phuket Express reports that 2 people sustained injuries in a motorbike accident on Wiset Road. It’s understood the accident was caused by gasoline that had leaked from the Volvo making the road surface slippery.

It is not yet known if the authorities plan to bring any legal charges against the driver of the car.

In this article:car on fire, Phuket, Rawai, Swedish national