Murder in Phuket Town by sword

One man is dead and another injured after an altercation at a nightlife venue in Phuket town, the provincial business hub on the island’s east coast. A 27 year old man was shot dead after arguing with female customers and allegedly attacking a security guard with a sword. It’s understood the incident took place at the Nai Mueang Sot nightclub on Bangkok Road in the sub-district of Talad Yai.

According to the report, rescue workers and police arrived at the scene early yesterday morning to find 2 injured men. One man, named only as Got, had been shot in the chest and was seriously injured. He was taken to a local hospital, where he was pronounced dead. The second man, a 36 year old named only as Odd, presented himself to police with a gun. Police also retrieved a sword from the scene.

“Odd” spoke to police and told them “Got” had been arguing with female customers in the club and the security guard had intervened to stop him. At that point, he alleges Got attacked him with a sword. The guard was slashed in the attack before he produced a handgun and shot Got in what he claims was self-defence.

Police have launched an investigation into the incident. It’s not known if Odd had a permit for the handgun or how Got came to have a sword in the nightclub. 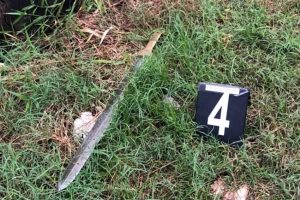