There have been plenty of twists and turns as the rush continues to get a navigable, and safe, road from Kathu to the top of Patong Hill.

Roadworks on the site of the collapsed section of the Patong Hill road continued today with stones being delivered on site to allow construction machinery to start replacing the washed-away foundations to the road. Trucks will be able to navigate to the area under the collapsed road to rebuild the necessary foundations before a new road is constructed. 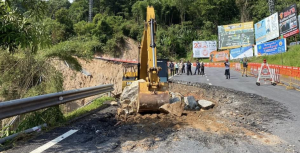 Meanwhile, the Pisona Group, headed up by Prab Keesin, the son of a former Mayor of Patong, and owner of Tiger Kingdom, has made a mysterious donation to “officials” for the establishment of a new track up to the top of Patong Hill, from Kathu.

The contribution of 300,000 baht was handed over yesterday, according to the public relations section of the Phuket provincial office. The donation was made by the Patong Development Foundation – Prab Keesin is the founder of the organisation.

The new road, let’s call it Patong Hill road 2.0, would start behind the Tiger Kingdom and Go-Cart track next door, at the bottom of the hill, and then take an alternative route to rejoin the current road at the top, adjacent to the Pun Thao Kong shrine.

According to The Phuket News, the new road would be 2.5 kilometres long and would be constructed in “2 weeks”.

Khun Prab told the media during the handover of the donation yesterday that the route has already been cleared, describing it as a”reserve road”. 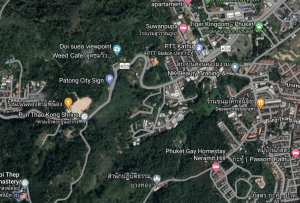 Road number three, we reported on yesterday, which is already well underway, which would provide a new route across the hills from Chalong (starting behind the Khlong Khata dam in Chalong) with the southern end of 50 Pi Road in Patong.

Works are currently underway which include widening the existing dirt track and adding proper drainage on either side.

The President of the Phuket Provincial Office say the new road will be 12 metres wide and should be ready “in two weeks” with a projected opening in the second week of November.

So, the race is on to see which project will be completed first. There is a clear urgency to get a trafficable road open from Kathu, over the hill, into Patong before the tourist surge starts for the 2022/2023 high season.