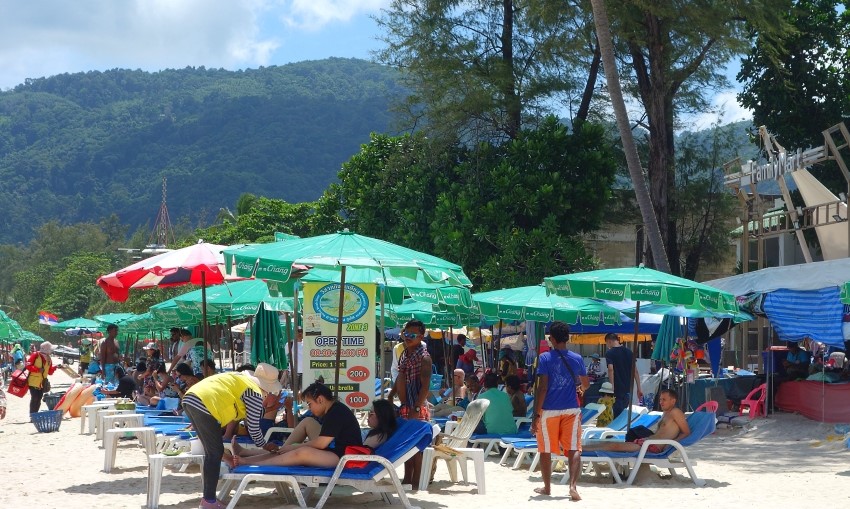 With the ongoing surge in tourists returning to Phuket, demand is fast exceeding supply when it comes to finding a beach sun lounge and umbrella at Patong Beach. This, according to a report from the National News Bureau of Thailand, which says officials plan to hold talks with vendors to address the issue. Again.

Patong Beach is currently enjoying an influx of foreign visitors from Europe, Russia (especially Russia), India, Australia, Singapore and the UK, according to the report. The surge in tourist numbers as global travel restrictions are eased or lifted completely means the current number of beach chairs and umbrellas is insufficient to meet demand.

Beach chair vendors have been campaigning for an extension to their allocated working area on Patong Beach, pointing out that there are not enough chairs and umbrellas for the number of tourists who want them.

Some have taken matters into their own hands, creeping beyond the borders of the “allowed” zone. Current regulations stipulate that beach chairs and umbrellas cannot occupy more than 10% of the 3-kilometre beach.

Prab Keesin, whose association represents beach chair vendors, says his members want the current zone extended to 20% of the beach for the current high season. It can then revert to 10% during the low season, according to Khun Prab. It’s understood his association is in the process of applying for official approval to extend the operating area for vendors.