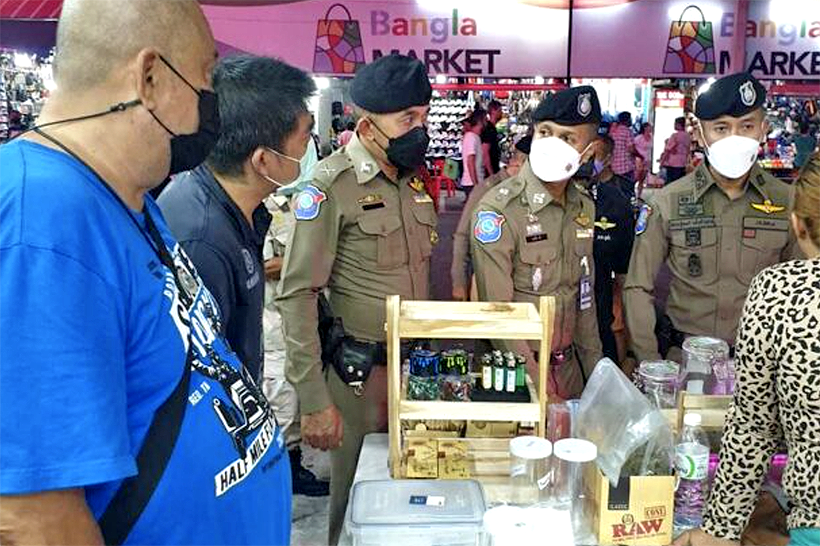 Patong police and local authorities have visited ‘weed’ shops in Bangla Road in Patong to stress to the vendors that selling marijuana and cannabis products still requires a certificate while also informing them of the penalties if found selling without. And the cnnabis must be for medicinal purposes only.

The visit was conducted following the announcement from Ministry of Public Health on June 16 that marijuana is a “controlled herb” so whoever intends to study, export, sell or extract, must file for a certificate from their Provincial Public Health Office, otherwise they will be guilty with Protection and Promotion of Traditional Thai Medicine Wisdom. Act, B.E. 2542 (1999). The punishment will be up to one year imprisonment or a maximum fine of 20,000 baht, or both.

The authorities told Thai media that the vendors they met with “understand the law and restrictions and promised to follow the protocol”.

Meanwhile, the Public Health Ministry on this week retracted a public notice sent to the National Police Chief a day earlier requesting police to arrest “people who sell marijuana and processed marijuana products without a permit”. It originally cited regulations on controlled herbs.

The backtracking follows senior health officials who met for an hour then spoke to the media.

They told reporters they decided to retract and review the matter because the intention of the letter was to restrict the use of marijuana for recreational purposes among those under 20 and pregnant woman, but soon realised that police would require “expertise of health officials before making an arrest of behalf of the Public Health Ministry”. There was also fear that it could affect vendors who are involved in producing and selling marijuana for medical purposes, and legally under the new law.

Thailand is still waiting for the new Marijuana Bill to be enacted by MPs which will “draw a line and limit the use of marijuana for recreational purposes “as much as possible”.