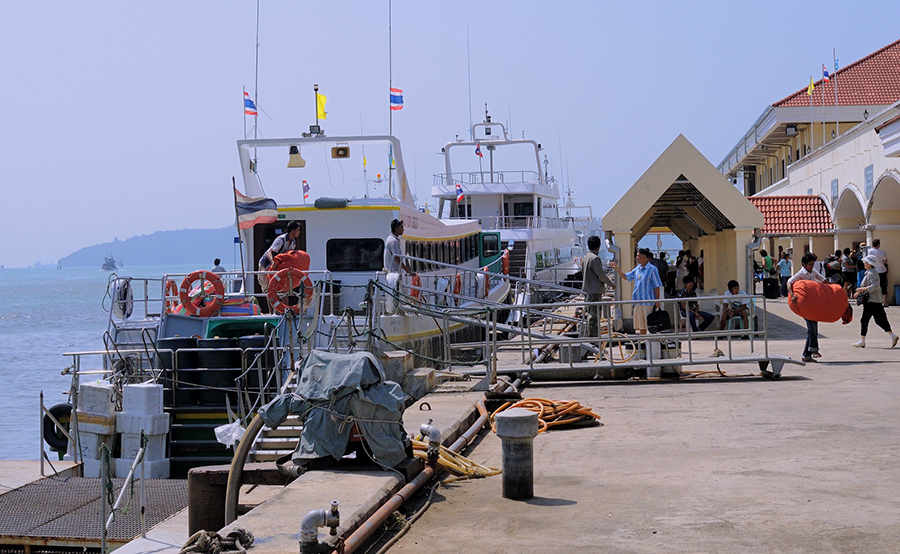 Two Phuket minivan drivers, who ended up in an argument over picking up foreign tourists at Rassada Pier, have been summoned for questioning. Both drivers appeared at Phuket Police Station yesterday, following the incident on Friday morning. The dispute was captured in a video clip that went viral, showing both men arguing over who had the right to pick up a group of tourists who had just arrived off a ferry from Koh Phi Phi.

According to the report, the video shows one driver talking to a man in a black shirt, who claims to be the manager of the taxi queue and told the 4 female tourists to get off the minibus they had just boarded. The driver subsequently gave a statement saying the tourists had used an app to book the transport, but when he picked them up at the pier, the employee of another minibus company stopped his vehicle. It’s understood the second minivan company regularly operates a service from the pier.

The Phuket Express reports that Adcha Buachan from the Phuket Provincial Transport Office was also in attendance during the questioning, along with a number of other officials. Adcha says attempts are being made to track down the 4 tourists to also get their side of the story.

“Both parties already filed complaints to the police which are currently under investigation. The company of the minibus driver also filed a complaint over the publishing of the video, accusing them of being a “taxi mafia”, that could cause a negative impact on the company and Phuket tourism. Tourist police are wanting to speak to the 4 female passengers seen in the video to find out about the history of the booking and what happened when they arrived at the pier, and create mutual understandings of what exactly happened on Friday.”