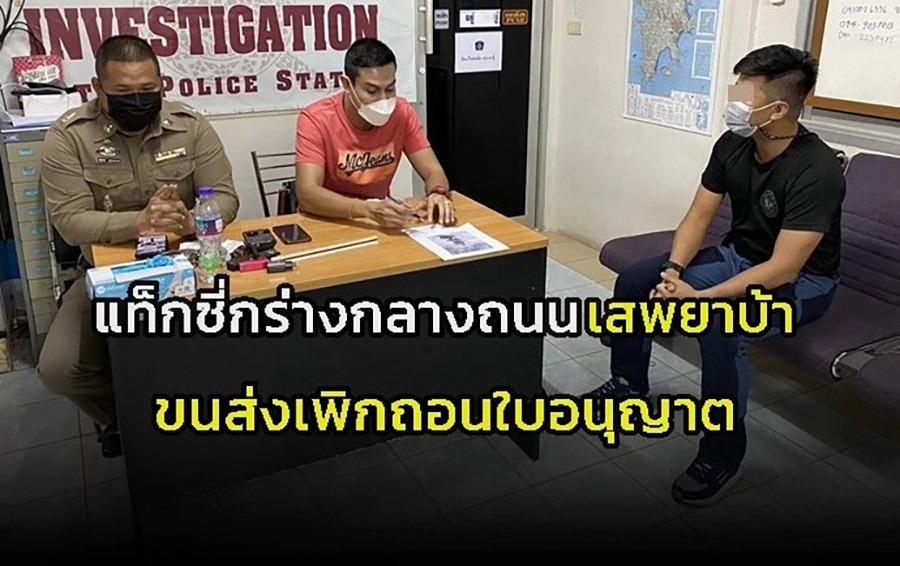 A Phuket taxi driver who verbally abused fellow motorists while high on methamphetamine has had his licence revoked. The incident, which took place in the Kathu district on Monday night, was filmed by a motorbike driver and subsequently went viral on social media.

In the video clip, the driver can be seen honking at other road users who are blocking his path as he tries to turn left on a red light. However, according to Passakorn Sirichochot, who filmed the aggressive driver, the junction did not permit such a manoeuvre.

“When I arrived at an intersection at a red light in Kathu, the taxi driver honked his horn repeatedly to chase other vehicles away again to make a left turn. However, there is a sign saying ‘Left turn please wait for the green light’”.

After the video went viral on social media, police tracked down the driver, who has been named as 33 year old Jirasak Raiyai. It’s understood he has admitted to taking methamphetamine pills before having his road rage episode.

According to the Phuket News, Rungrit Ratanaphakdi, chief of Kathu Police, says Jirasak tested positive for a category 1 narcotic and has been charged accordingly. He has also been charged with driving while under the influence.

Kornphithak Assuwan from the Phuket Provincial Land Transport Office has confirmed that Jirasak’s licence has been revoked and that he faces a fine of up to 5,000 baht for using vulgar language with other motorists.

According to the Phuket News report, Jirasak’s vehicle carried the logo of one of the taxi cooperatives with exclusive rights to pick up passengers at Phuket Airport, as well as a sticker informing passengers of the 1584 complaints hotline.