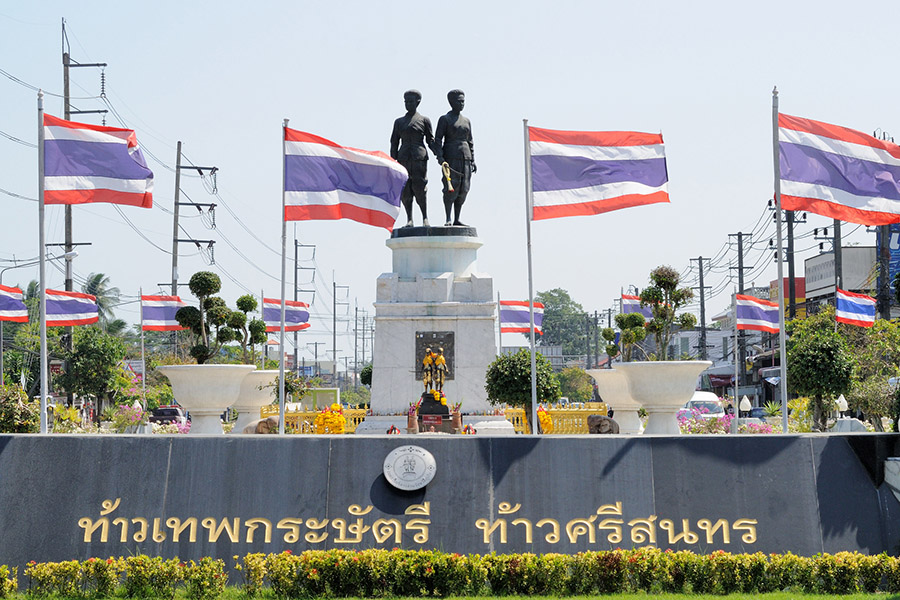 Local officials in Phuket plan to find a new, temporary home for the Heroines Monument, currently located in the centre of the island. The monument sits atop a (usually closed-off) roundabout, or traffic circle, where major road renovations are being planned at the intersection of Thepkasattri and Srisoontorn roads (the surnames of the two women featured in the monument’s statue).

According to a Phuket Express report, officials held a meeting yesterday to discuss the relocation of the monument, which commemorates two Thai heroines, Thao Thepkrasattri and Thao Srisoonthorn, who played a major role in repelling a Burmese invasion of the Thalang area in 1786. The monument is located between Phuket Airport and Phuket Town, where Thepkasattri Road and Srisoonthorn Road connect.

Officials plan to renovate both Thepkasattri Road and the Tha Rua Intersection, near the monument, with plans to construct an underpass to address long-term congestion. The project will require the relocation of the monument, a major Phuket landmark, until the work has been completed.

It’s understood officials plan to temporarily house the monument at the Thalang National Museum. However, the heroines’ ancestors and other locals would prefer to see it moved to the Phra Nang Sang Temple, also in Thalang. A decision is expected to be announced in the near future, according to the report.