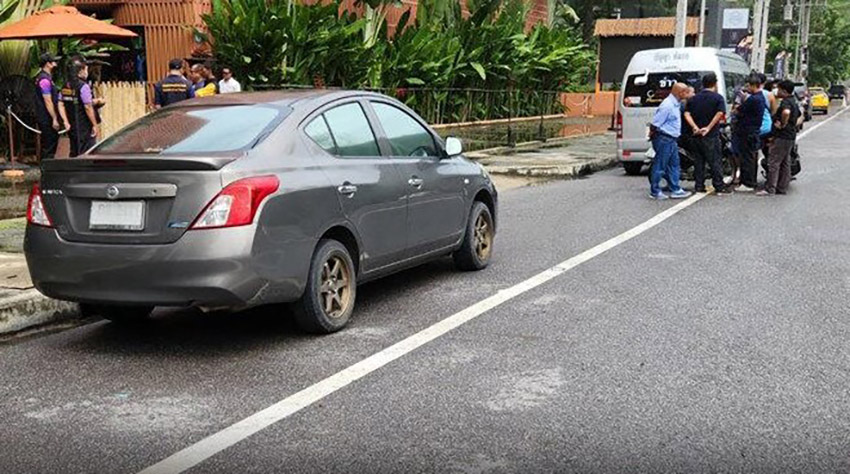 Two Phuket taxi drivers have had their licences suspended after an altercation (perhaps a ‘misunderstanding) when one driver hit the other’s car, denting the bonnet/hood. The incident occurred outside the Café del Mar beach club at Kamala, on the west coast of the island.

It’s understood a customer had used the Grab app to call a taxi because he found the prices being charged by the taxis stationed at the club were too high. When the Grab driver, named as Ms Naruemon, arrived to pick him up, her vehicle was prevented by leaving by another driver, named as Mr. Wilart. It’s alleged that Mr Wilart and a number of accomplices then proceeded to attack the vehicle, causing dents and scratches.

According to a Phuket Express report, Sermpan Sirikong from the Phuket Provincial Police says both drivers have been fined – Ms Naruemon for picking up passengers in an area where she was not licenced to operate.

“One taxi driver, Ms. Naruemon, was fined 2,000 baht for using an unlicensed application. The application she used can only be serviced in certain areas of Phuket but not for Kamala and not this particular venue.

The Phuket Express reports that signs placed at the venue indicate that Grab and Bolt drivers are not licenced to operate from there, due to “security reasons”.

However, outraged social media users claim the reality is that it’s about individual agreements, money, and contracts with Phuket taxi drivers and not about the security of customers.