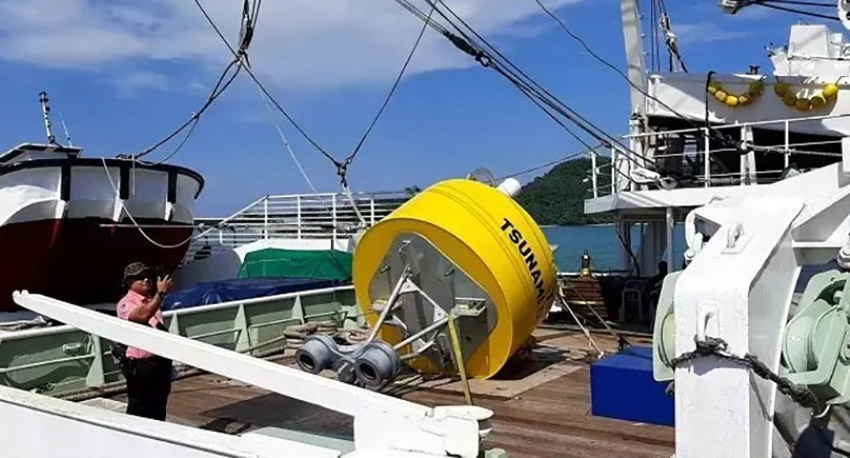 Two tsunami detection buoys off Phuket are being replaced, with a ceremony held at the Phuket deep sea port to launch the vessel that will carry out the work. The vessel left Phuket yesterday and will be at sea for 14 days, until November 28.

The ceremony was presided over by Boontham Lertsukhikasem, director of the Disaster Prevention and Mitigation Department, accompanied by Suchart Thampithakvej from the Royal Thai Navy, and Phuket Governor, Narong Woonciew. Also in attendance were the consuls-general of 11 countries, alongside a number of other officials.

The two tsunami buoys are meant to be located to the west of the island, in the Andaman Sea and Indian Ocean. They were placed there following the 2004 tsunami, which Phuket, along with many other affected areas, was in no way prepared for.

The December 26 tragedy, one of the deadliest natural disasters in recorded history, killed between 230,000 – 250,000 people and caused immense destruction around the Indian Ocean coastline. The highest number of casualties were in Indonesia (northern Sumatra/Aceh), Sri Lanka, India, and Thailand.

In the wake of the disaster, a number of countries implemented tsunami warning systems, including Thailand. The 2006 installation of 2 tsunami detection buoys was overseen by the National Disaster Warning Centre, part of the Disaster Prevention and Mitigation Department.

It’s understood both buoys were supposed to have maintenance work carried out on them every 2 years in order to ensure they continued recording and transmitting data.