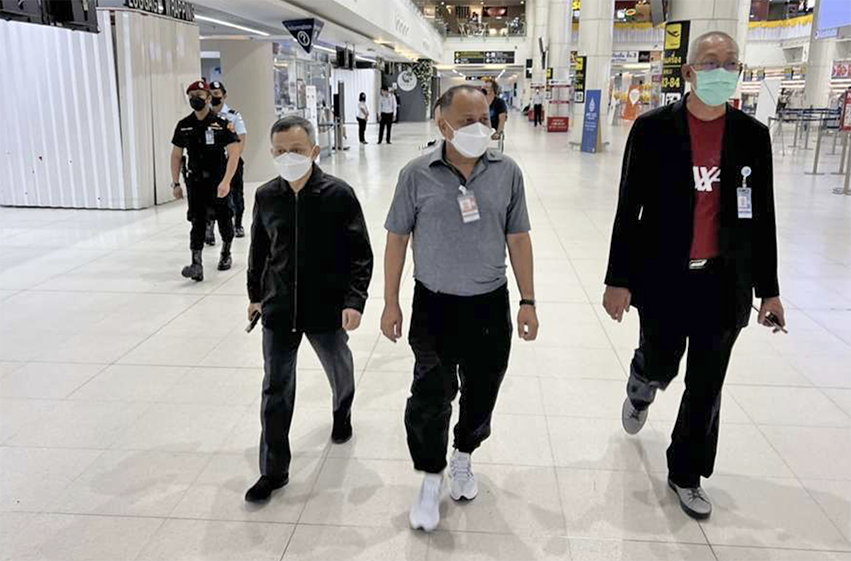 Phuket’s Governor, Narong Woonsew, visited the runway at Phuket International Airport late yesterday to follow up on the progress of the repair and announced that the repair has been completed.

Runway 27 was reported with a 4 x 4 metre crack on its surface causing delayed landings to five flights and delays or diversions for a total of 22 flights.

Phuket International Airport General Manager, Monchai Tanod, admitted that there were 5 flights that could not land due to the situation. The planes had to remain in air waiting for the repairs to be completed.

It took 40 minutes, from 1 PM – 1.40 PM to fix the runway before allowing the planes to land. The runway was closed for more permanent repairs later on the same day from 5 – 9pm (although the airport advertised it would only take from 5 – 7pm). Both airport terminals were informed about the inconvenience and passengers were kept up to date about the delays for departures and arrivals, according to the airport manager.

The General Manager said that there are 4 – 5 rounds of runway checks daily and if any spot is found broken, the runway would be closed for an immediate repair while the airport terminals would be informed about it.

Phuket’s Governor said after his inspection that he found that the airport staff could fix the problem fast and “adapted with the situation efficiently”.

“The runway was closed temporarily to affect an immediate repair to allow for emergency landings (to ensure the passengers’ safety), then a permanent repair followed later on in the evening.”