A Greek national, wanted for the murder of a Phuket beautician almost 4 years ago, is now in custody after being arrested in Greece last Thursday.

46 year old Dimitrios ‘Dim’ Chairopolous is alleged to have murdered his wife, 43 year old Niramon ‘Bea’ Aewkaew, in Phuket in 2019. ‘Bea’ was the eldest of 5 children from Phatthalung province and had been working in Phuket.

Police allege that, after the murder, Mr. Chairopolous left the apartment he was renting in Bang Tao, where his wife’s body was found, and headed directly to Phuket Airport for a flight to Dubai.

He was recorded as clearing immigration at Phuket International Airport to board a flight to Dubai, boarding an Emirates flight EK0379 to Dubai, departing Phuket at 2am. Police also confirmed that he arrived in Dubai on the same day. It was later shown that his departure from Phuket was a short time after the murder, according to Phuket police investigators.

The beautician had not made any contact with her family for several days in February 2019. They contacted the owner of the apartment block who used his key to enter the apartment.

The air-conditioning was still on in the room but there was no response.

The woman was “lying dead in bed with a black cloth over her mouth and handcuffed”. She was last seen alive on the evening of February 11 when CCTV showed the couple entering the room.

The 46 year old Greek man, worked as a security guard in Athens and has a daughter from a previous marriage. He married the Phuket-based beautician in 2016.

Relatives of the unfortunate woman speak of a strange and irritable, highly manipulative man who wanted to control his wife’s every move. They also said he was insanely jealous and told her that if she left him he would kill her. 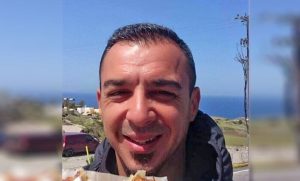