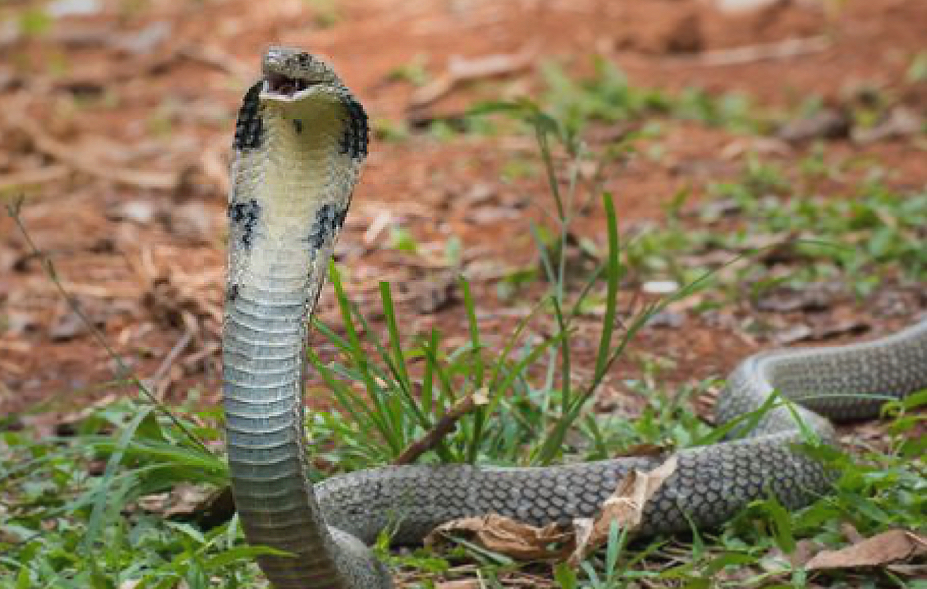 With some 230 different species identified in Thailand you will see one, or two, sooner or later. From the massively long  pythons that can reach up to 7 metres in length, to the nasty, smaller scaly critters like the Malayan Pit Viper, there are plenty of others in between.

Over 7,000 snakebites are treated each year in Thailand’s hospitals with the Monocled Cobra most responsible when it comes to resulting fatalities.

On the positive side, most aren’t venomous or much of a threat to humans, but you should be aware of the ones that can inflict some damage, or even kill you. We should  also stress that lethal encounters are not common, still the more you know about some of the more common species, the better.

PLEASE NOTE: In all cases, treat any snake bite as a serious incident and seek immediate medical attention.

The most deadly of Thailand’s snakes are the cobras (we’ll discuss the Malayan Pit Viper a bit later). Despite often growing more than 2 metres, they are still very quick if threatened.

Of all the cobras, the Monocled Cobra has the highest fatality rate of all snakes in Thailand.

Amazingly, King Cobras are immune to the venom of other snakes. A King Cobra can kill a Black Mamba within a few minutes.

As the name suggests, Spitting Cobras are very efficient and accurate when it comes to spitting venom in the eyes of their victim, causing extreme pain and probably blindness. Their goal is to blind their victim and they do so with precision from as far away as 3 metres.

The Monocled Cobra is quite common and seen all over Thailand as well as in Nepal and southern China. While it usually travels on the ground it’s just as skilled at swimming or climbing and could be seen in country or city locations, any time of the day.

The Monocled Cobra is one of the most dangerous snakes in Thailand, often growing over 2 metres in length. Their venom is very potent and life threatening to humans. The Monocled Cobra is definitely one to avoid. Like the other cobras, just don’t get close enough to find out precisely the species of Cobra! 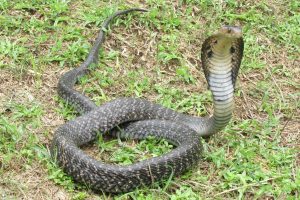 The Burmese Python is usually found living in the countryside in long grass and around the edge of mountains and hills. It’s one of the five largest species of snakes in the world and native to a large area of Southeast Asia but is found as an invasive species elsewhere.

While they can also be found in Bangkok’s inner city regions, this is less common, and they tend to be seen more at night than during the day.

Fully grown the Burmese Python can reach up to 7 metres in length and prefer to eat warm-blooded mammals, including domestic cats and dogs. Burmese Pythons may bite to defend themselves. Smaller Burmese Pythons are not generally dangerous to people or pets. But larger Burmese Pythons have large, sharp teeth, and their bites can cause severe lacerations

It’s uncommon to be attacked or bitten by a Burmese Python. 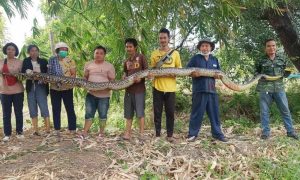 The Reticulated Python is found throughout Thailand even in the suburbs of Thailand’s population centres. They are most commonly seen at night and close to water sources and are renowned for their long distance swimming.

While a Reticulated Python can attack if threatened, and can also inflict a bite, the venom isn’t dangerous to humans. They usually don’t grow to much larger than 4 metres.

There are more than 20 different species of Pit Viper in Thailand and without getting too close, there’s no easy way to tell the species apart.

The Malayan Pit Viper, which is endemic to Southeast Asia from Thailand to northern Malaysia and on the island of Java, is most likely sfound under dry leaves and stones. Matching much of its surroundings, the Malayan Pit Viper can grow to 1 metre in length and is mostly seen out at night.

This species has a reputation for being bad-tempered and quick to strike. In northern Malaysia it is responsible for some 700 incidents of snakebite annually with a mortality rate of about 2 percent. In a prospective phase of the study, bites occurred throughout the year but mostly early in the monsoon season (May to September).

Like with the Monocled Cobra, the Malayan Pit Viper is one of the deadliest snakes in Thailand. It can strike quickly and a bite will need urgent attention. 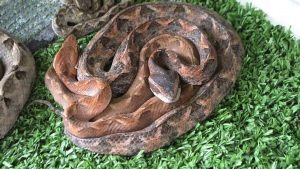 The White-lipped Pit Viper however is one of the most frequently found snakes in Thailand found almost everywhere. Living off of a diet of birds, lizards, rodents and frogs, Pit Vipers stick to the ground at night, and can grow to just over 1 metre in length and is bright green in colour.

While the White-lipped Pit Viper isn’t as much of a threat to humans as the Malayan Pit Viper, it’s still very painful if you are bitten and can still kill you if you don’t receive medical attention quickly. A serum to protect humans from all green Pit Vipers is readily available.

The Oriental Whip Snakes are usually green in colour and can be found in the trees and forests of agricultural areas. Lying in distinctive loose loops both while awake and asleep, Oriental Whip snakes hang around the outer branches, where they can easier feed on birds, frogs or lizards.

They can bite and it is venomous and will need a quick visit to hospital to avoid the worst effects of the venom.

The Golden Tree Snake is found just about everywhere in Thailand, from the cities to the forests up north. The Golden Tree snake will be found wherever there are  geckos, lizards, rats and other small rodents. They can even climb walls and will most often be seen during the day.

The venom is mild and unlikely to cause any major problems for humans. 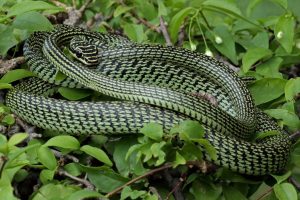 The Copperhead Racer is fast, hence the name, and will react quickly when it senses danger. They’ll grow up to 2 metres and will usually be found in forest areas and in towns all over Thailand. The Copperhead Racer stays down on the ground and you’re most likely to see them during the day.

There’s nothing to worry about when it comes to being in danger with a Copperhead Racer. They’re non-venomous and pose no threat to humans at all.

The banded krait found on the Indian Subcontinent and Southeast Asia. It is one of the largest kraits, with a maximum length up to just over 2 metres.

It is easily identified by its black and yellow stripes, its triangular body cross section, and a marked ridge consisting of shields along its body.  The eyes are black and has arrowhead-like yellow markings on its otherwise black head with yellow lips, chin and throat.

The banded krait occurs in the whole of the Indo-Chinese subregion, the Malaysian peninsula and archipelago, and southern China. The species is common in Assam and Tripura of India and Bangladesh, but becomes progressively uncommon westwards in India.

They look dangerous, they are dangerous, and have a nasty venom that could kill you. 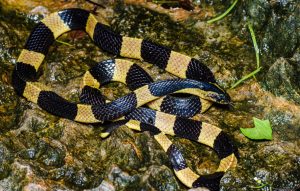 They can be aggressive but post little danger to humans but they can be easily mistaken for a Banded Krait snake, with similar yellow and black stripes. The Banded Krait is very venomous and deadly so best not to get close enough where you can tell the difference.

Typically growing to little over a metre in length, the Indochinese Rat snake (Ptyas korros) can usually be found around the lowland areas throughout all of Thailand during the day time.

While they pose no threat to humans, they can be very quick to jump and bite when cornered and feeling threatened. Typically though they’re fairly speedy snakes, and would ultimately prefer to flee.

Known officially as Xenochrophis piscator, the Checkered Keelback is also known as a fish snake, due to it’s propensity to be found in close proximity to water. Often reaching lengths of up to 2 metres, the Checkered Keelback is most commonly active in the daytime, and can be known to cover pretty large distances when on the prowl for some dinner.

The Checkered Keelback can often be mistaken for a Cobra due to the way in which, if agitated, it will often flatten out the neck and stand erect before moving in to bite. If they do bite, it isn’t threatening to humans.

PLEASE NOTE: In all cases, treat any snake bite as a serious incident and seek immediate medical attention.