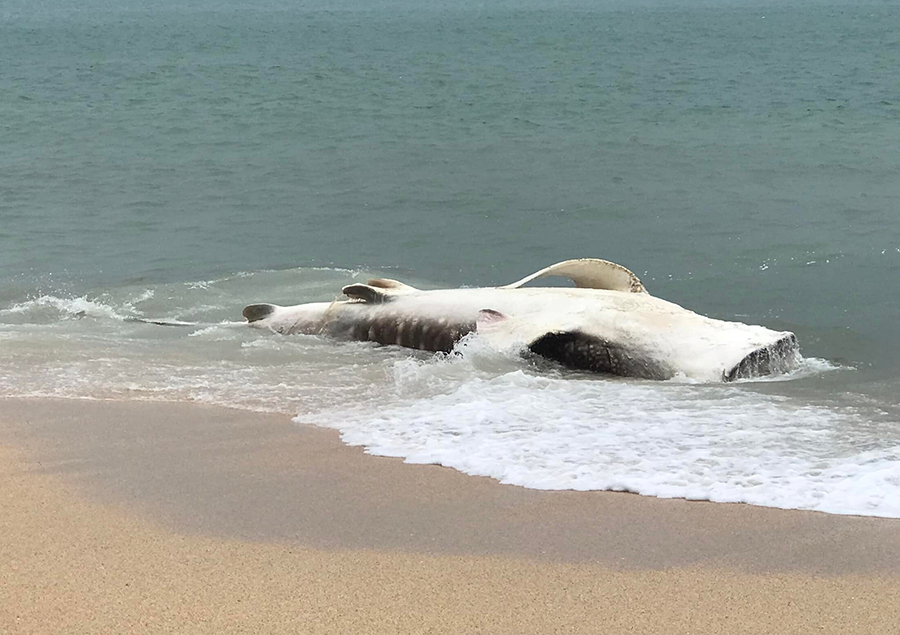 The body of a huge whale shark has washed up on a beach on the popular tourist island of Koh Lanta, in Krabi province. According to media reports, the protected marine animal was found near a resort on Long Beach. The manager of the resort, Somboon Kangrang, says he contacted marine officials on discovering the body.

“The dead whale shark had washed up on to the beach near the resort before I called officials.”

The whale shark is found in open waters of the tropical oceans and is rarely found in water below 21 °C. Studies looking at vertebral growth bands and the growth rates of free-swimming sharks have estimated whale shark lifespans at 80–130 years.

Whale sharks have very large mouths and are filter feeders, which is a feeding mode that occurs in only two other sharks, the megamouth shark and the basking shark. They feed almost exclusively on plankton and small fishes, and pose no threat to humans.

The Phuket Express reports that a team from the Marine Resources and Andaman Coastal Research Centre arrived at the beach location some time later, along with members of the Royal Thai Navy. The whale shark’s body had started to decompose by the time it washed up but there were no signs of it having been injured by fishing equipment, according to the report.

The whale shark was 7.3 metres in length and weighed 2.5 tonnes. Officials took samples from the body away with them for examination and the marine creature was then buried nearby.

\Whale sharks are a protected species given that they are at risk of extinction. Their presence is usually good news for fishermen as it means there is an abundance of marine resources in the area.

A local diver, named as Gai Tong, says it could be a whale shark that was frequently spotted in the waters around the area but that had recently gone missing.

“It might be the same whale shark that we often saw near Phi Phi Island and Lanta Island. In the past 10 days we have not seen it.”