The Bangkok Art and Culture Centre will host this year’s Bangkok Film Festival, starting today and running until Sunday. The event is part of a marketing promotion from the Bangkok Metropolitan Administration. The “Colourful Bangkok” campaign aims to promote the capital as a creative destination, according to a report from the National News Bureau of Thailand.

Each day, there will be screenings of 3 award-winning films, seen as the highlight of the event. They are “Legend of Suriyothai,” “Bad Genius,” and “Blue Again”. The screenings will take place in an open-air style theatre outside the venue. 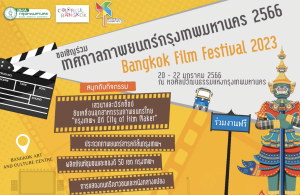 Other happenings include the “Bangkok: The Creative City,” seminar and a workshop on directing, editing, and screenwriting, which will be led by film experts. A competition for short documentary films will also be held under the theme “Connecting Bangkok 2030.” Competition prizes will total 200,000 baht, according to the NNBT report.

The festival will also include live music performances and the opportunity to purchase unique products from each of the 50 districts in Bangkok. Events get underway from 10am each day, finishing up around 10pm. More information is available on the BMA’s website and Facebook page.