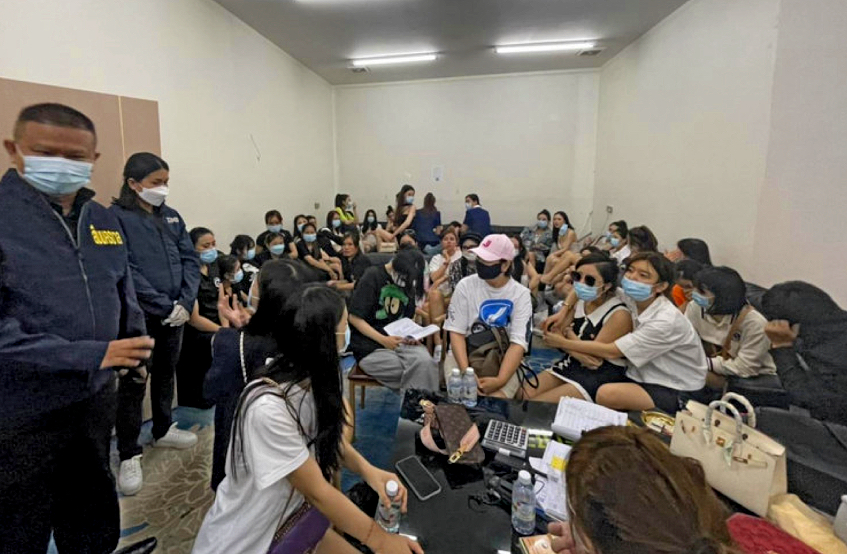 The Thai government ruling coalition, led by the Palang Pracharat party and PM Prayut Chan-o-cha, is underfire today after links have emerged with a Chinese ‘businessman’ who was detained during a raid of a ‘party’ den in Sathorn District this week.

Bangkok police raided the hidden venue on Tuesday night and held 247 patrons and staff for drug tests and checks on their immigration status.

One of the men retained is listed as a donor of the ruling Palang Pracharat Party, according to the Justice Minister Somsak Thepsuthin. He admitted that the party did not do “background checks” of its donors but insisted that the donations were made “in accordance with the law”.

The businessman, Chaiyanat Kornchayanant, donated as much as 3 million baht to the political party in 2021.

More than 100 Bangkok police raided the unlicensed “party and gambling” venue in Yannawa and detained 247 “mostly Chinese” customers. The building was hidden behind a car wash centre.

Since, police are now investigating a possible connection between the pub and Chaiyanat, a “controversial Chinese businessman” who was once a suspect in a murder case, according to Thai PBS World.

Chaiyanat, who is married to a Thai after arriving in Thailand more than 20 years ago, is a major tour operator catering mainly to Chinese tourists.

A former senior metropolitan police officer, Pol Maj Gen Vichai Sangprapai, claioms that Bangkok has “now become a haven for Chinese businessmen with dubious backgrounds” suggesting that there has been “possible collusion by corrupt authorities”.