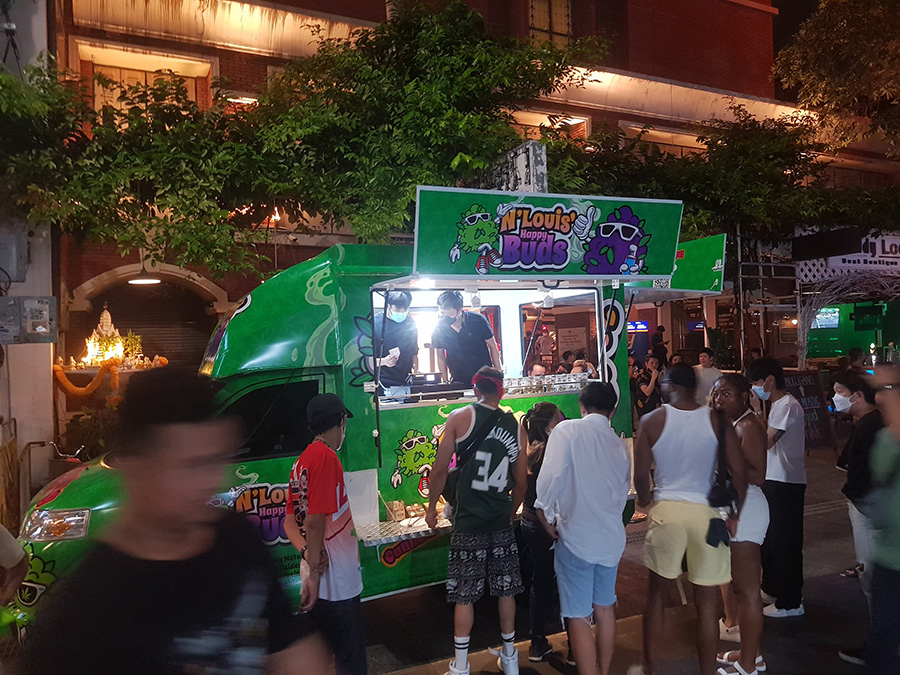 Thai authorities have visited a number of cannabis retailers on Bangkok’s popular Khao San Road, to warn against selling the plant for recreational purposes. That done, there seemed little more they could do. The visits were carried out by officials from Phra Nakhon District Office, accompanied by officers from Chana Songkhram Police Station and representatives from the Department of Traditional and Alternative Medicine.

Similar casual visits have also been made along Bangla Road where there’s been a similar proliferation of ‘weed’ shops since June 9 this year.

According to a Nation Thailand report, Thongchai Lertwilairattanapong, director-general of the DTAM, says a total of 5 shops were inspected as they were advertising cannabis for recreational use. The shops were all found to have a licence to sell the drug, however one store had obtained its licence from Lopburi, north-east of Bangkok, when it should have been obtained in the capital.

It’s understood the stores were offering customers a dedicated room in which to smoke cannabis. Thongchai says such recreational use is not quite what the Public Health Ministry intended when cannabis was decriminalised earlier this year. He adds that the shop owners concerned have been asked to run their businesses accordingly, but admits his department cannot legally do anything.

The reason for this is that there are no provisions in the “Notification of the Ministry of Public Health Regarding Controlled Herbs (Cannabis)” to allow legal action against a store that opens a room for the recreational use of cannabis. However, Thongchai plans to investigate further as he says this issue may be addressed in another cannabis-related regulation.

The DTAM chief warned that business owners who want to support the decriminalisation of cannabis for medicinal and economic reasons, not including recreational use, must adhere to the law or face stricter regulations.