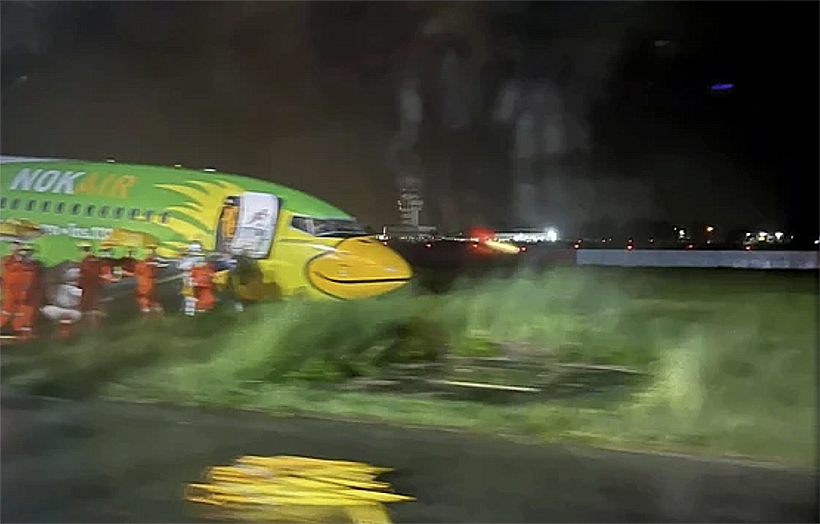 A Nok Air flight has slid off the main runway at Chiang Rai’s Mae Fah Luang airport on Saturday night, just after 9pm. The plane was attempting a landing during a heavy rainstorm. There were 169 people on board but no one was injured.

But, despite the emergency, some passengers complained they were stuck inside the plane for up to an hour with no food, water or ventilation. Their claims are in direct contradiction to a statement issued by Not Air saying that all passengers were looked after, including being provided with food and water during the aftermath of the incident.

“The company will cooperate with related agencies to investigate the cause of the incident.”

Passengers complained that the evacuation process was very slow and there was no clear announcements from the pilot during the emergency. They were taken by a bus to the main terminal and had to wait longer for their luggage which was recovered from the stranded aircraft.

The Not Air Boeing 737-800, flight number DD108, was attempting to land during heavy rain. It had taken off from Don Mueang International Airport in Bangkok and hour before.

The Chiang Rai airport has announced that it has closed the runway on Sunday between 6am and 10pm due to the runway incident on Saturday night. Thai Smile, Thai Vietjet and Thai Air Asia are ferrying their passengers by buses from Chiang Rai to Chiang Mai International Airport where they are being transferred onto other flights.

In this article:Chiang Rai airport, Not Air, runway