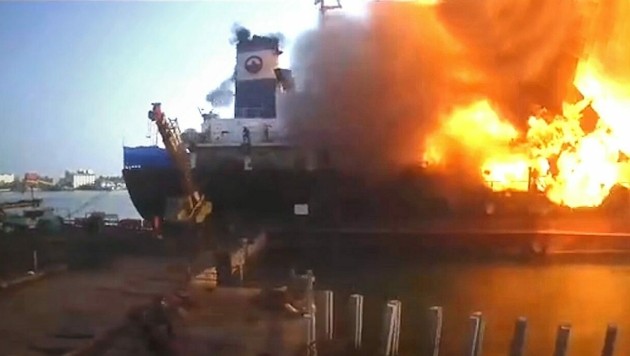 Six more bodies have been recovered after explosions ripped through an oil tanker during welding maintenance at a dockyard southwest of Bangkok early yesterday.

The six victims, all Burmese, raised the number of confirmed deaths to eight. There is one person still listed as missing.

The Smooth Sea 22 tanker arrived at the dockyard for maintenance on January 12. It then exploded during welding work at about 9am yesterday, according to investigators.

An empty oil tanker caught fire after a massive explosion while undergoing maintenance at a dockyard on the Mae Klong River in the main city district of Samut Songkram yesterday morning.

Tragically, one person died*, nine were injured and seven workers remain missing as a result of the incident. According to an advisor to the Thai Labour Minister, eight men were working on the tanker when the first explosion occurred. The foreman, who was in the engine room, quickly told the workers to leave the ship immediately. Three more explosions were then heard on board the ship.

The Thai Maritime Enforcement Command Centre reported that the explosion occurred on the Smooth Sea 22 tanker at around 9.17 am, in the dockyard of Ruam Mitr Dockyard Company in Laem Yai sub-district, about an hour’s drive south west from Bangkok.

The explosion shattered windows in houses near the dockyard and some people sustained minor injuries. However, more injuries were later reported, and one person died.

Seven others are still unaccounted for as emergency crews continue to search the area.

Samut Songkhram Governor Somnuk Phromkeaw stated that the fire was mostly under control and that a relief command center has been set up to take care of the 80 crew members of the vessel, including around 30 Thais.

The oil tanker had been moored at the dockyard on January 12th, after it had unloaded all of its oil. The cause of the fire and explosions is currently under investigation.