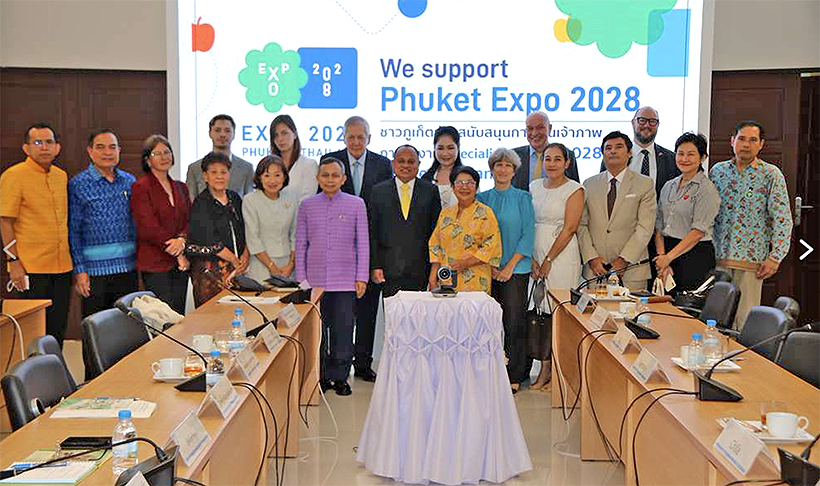 On July 8, Phuket Governor, Narong Woonsew, chaired a meeting between Phuket authorities and the 13 international consuls in Phuket, including Australia, Russia, Norway and France. The meeting was attended by all three Vice Governors and the island’s Honorary Consulates.

The Governor said that the meeting aimed to support Phuket to be the host of the Specialised Expo 2028. Phuket authorities are asking for support from the consulates representing the 13 countries. They were informed about the Expo and the benefits of Phuket becoming a host. The consulates were also asked for suggestions and opinion for how Phuket could benefit from the Expo whilst visitation to the island would increase.

The representative of Thailand Convention and Exhibition Bureau and the President of Phuket Tourism Association explained the details and benefits of proposing Phuket as the host, as well as information regarding the preparation of the island as the potential host.

Five countries have submitted competing candidatures to organise the next Specialised Expo: the United States of America (in Minnesota), Thailand (in Phuket), Serbia (in Belgrade), Spain (in Malaga), and Argentina (in San Carlos de Bariloche).

The project examination phase for Specialised Expo 2027/28 is currently underway, with each candidate having submitted a detailed candidature dossier to the BIE.

The BIE will organise Enquiry Missions to all candidate countries between July and October 2022 to assess the feasibility and viability of each candidature project.

The host country of Specialised Expo 2027/28 will then be elected by BIE Member States, gathered in a General Assembly set to take place in June 2023, on the principle of one country, one vote – BIE Paris

Phuket Vachira Hospital was the chosen location for a public relation event and avenue to promote the event to residents. There will be events to promote the event organised between local government and the private sector, such as a charity running event, raising fund for Phuket Vachira Hospital. They were informed about the arrival date of the Bureau International des Expositions (BIE), from July 25 – 29 (for their inspection of the island).

They emphasised the benefits Phuket will gain as a host of the expo, especially assisting economic recovery, development of basic infrastructures, public transportation, development in quality of life, in line with the topic Thailand proposed ‘Future of Life: Living in Harmony, Sharing Prosperity’. The event will also promote Phuket as a quality MICE (meetings, incentives, conventions and exhibitions) venue.

The group of Honorary Consulates indicated their support at the meeting and says they would file the information to their respective embassies.

During the meeting the consulates suggested about opening opportunities for foreign investors, domestically and internationally, to invest in the expo, the usage of the expo convention centre after the event finishes and some public relations to urge both government and the island’s private sector to cooperate to promote the island as the host.