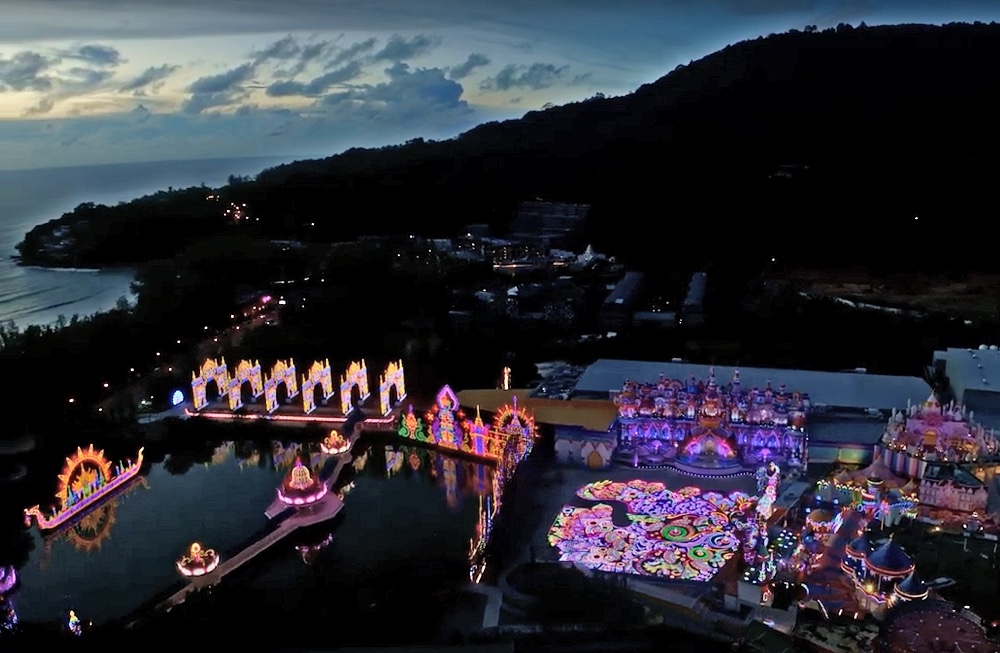 A new night time theme park called “Carnival Magic – The Magic Kingdom of Lights” is opening on Phuket on September 20.

At a cost of 6.6 billion baht and sprawling over 100 rai (40 acres) of land, the all new Thai cultural theme park in Kamala is being branded as “the only place of its kind in the world”. The people behind the project, the same owners as the 24 year old Phuket Fantasea, boast of 40 million lights adorning the new theme park (we’ll take their word on that). The new attraction for the island boasts three main areas…

Zone 1 – Shopping Street (Carnival Fun Fair). Shops are designed in a “carnival style”. Unique for tourists to enjoy activities throughout the night. It also includes a virtual reality “Player Centre”.

Zone 2  – The Bird of Paradise Restaurant can accommodate 3,000 guests, the atmosphere is like dining in “a garden of paradise”. There will be over 100 international buffet-style choices including separate areas for Halal, Indian and private groups.

Zone 3 – A theatre (The River Palace) that seats 2,200 and is claimed to be the “largest theatre in the world”. The theatre is 200 meters long. The show is a “parade” showcasing “Thai arts with modern technology”.

A highlight is a new 70 metre long parade, equivalent to the length of an Airbus A380, a massive parade “in the air”. There’s also a Loy Krathong day scene that uses animatronics technology. There will eventually be 4 shows per day, but in the early stages there will be just 2 rounds per day. The show runs for 50 minutes.

“Inspired by exotic carnival celebrations from around the world, Carnival Magic presents a breathtaking evening of joyous celebration, regal pageantry and cultural fun unmatched by any other place on earth.”

The property has been constructed in the same location as the original Phuket Fantasea in Kamala and was scheduled to open in 2020 but, you know… Covid-19. The new attraction will be able to draw on Phuket Fantasea’s 24 years of experience tapping into the Phuket hospitality market and its fleet of pick-up buses, making getting to and from the attraction easy for visitors around the island.

Whilst the original Phuket Fantasea relied heavily on its international buffet and extravagant show, including ‘performing’ animals, the new park is much more technology oriented with retail opportunities mixed into the experience. Ticket prices start at 3,000 baht per person, including entry to all attractions and the buffet. Or 2,600 for entry to the park only.

The new theme park is another example of the huge amounts of money being invested into Phuket at the moment, just three months after the opening of the huge water theme park, Andamanda.

Find out more about “Carnival Magic – The Magic Kingdom of Lights” HERE.