Flooding in the Philippines after typhoon Noru. Photo: Flickr/Flood List

After killing at least 6 people (updated since the earlier report) and causing widespread devastation in the Philippines, Typhoon Noru is heading for Vietnam and expected to make landfall over Central Vietnam later today.

The typhoon has sustained winds of up to 150 kilometres an hour and is travelling at a speed of around 35 kilometres an hour as it crosses the South China Sea towards the Vietnamese coastline. By Thursday, Noru is expected to have moved into the northeast and north of Thailand, after passing through Laos, and to have weakened to a tropical storm. The TMD says the storm will enter Thailand through Amnat Charoen or Ubon Ratchathani province in the early morning of Thursday, September 29.

Thai Meteorological Department has issued a warning of wet and windy conditions for all corners of Thailand in the coming days. The southwesterly monsoon over the Andaman Sea, the South, and the Gulf of Thailand is also forecast to strengthen. From tomorrow until Saturday, the North, Northeast, East, South, and Central Thailand will all experience heavy to very heavy rainfall, with strong gusts in some parts of the country.

Here is the latest synoptic chart from the TMD… 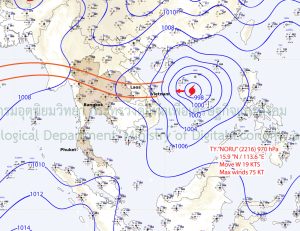 “A warning for flash flooding and overflows is in place for low-lying areas and foothills and residents by the sea shore are being cautioned about inshore surges. Waves of between 2 and 3 metres in height are expected in the Andaman Sea and upper Gulf and up to 2 metres high in the lower Gulf. Waves will be higher during thunderstorms.”

“Ships are advised to proceed with caution, while smaller vessels in the Andaman and upper Gulf have been instructed to remain ashore.”

Rain is expected throughout the forecast period in Phuket with moderate south westerly winds increasing during the week.